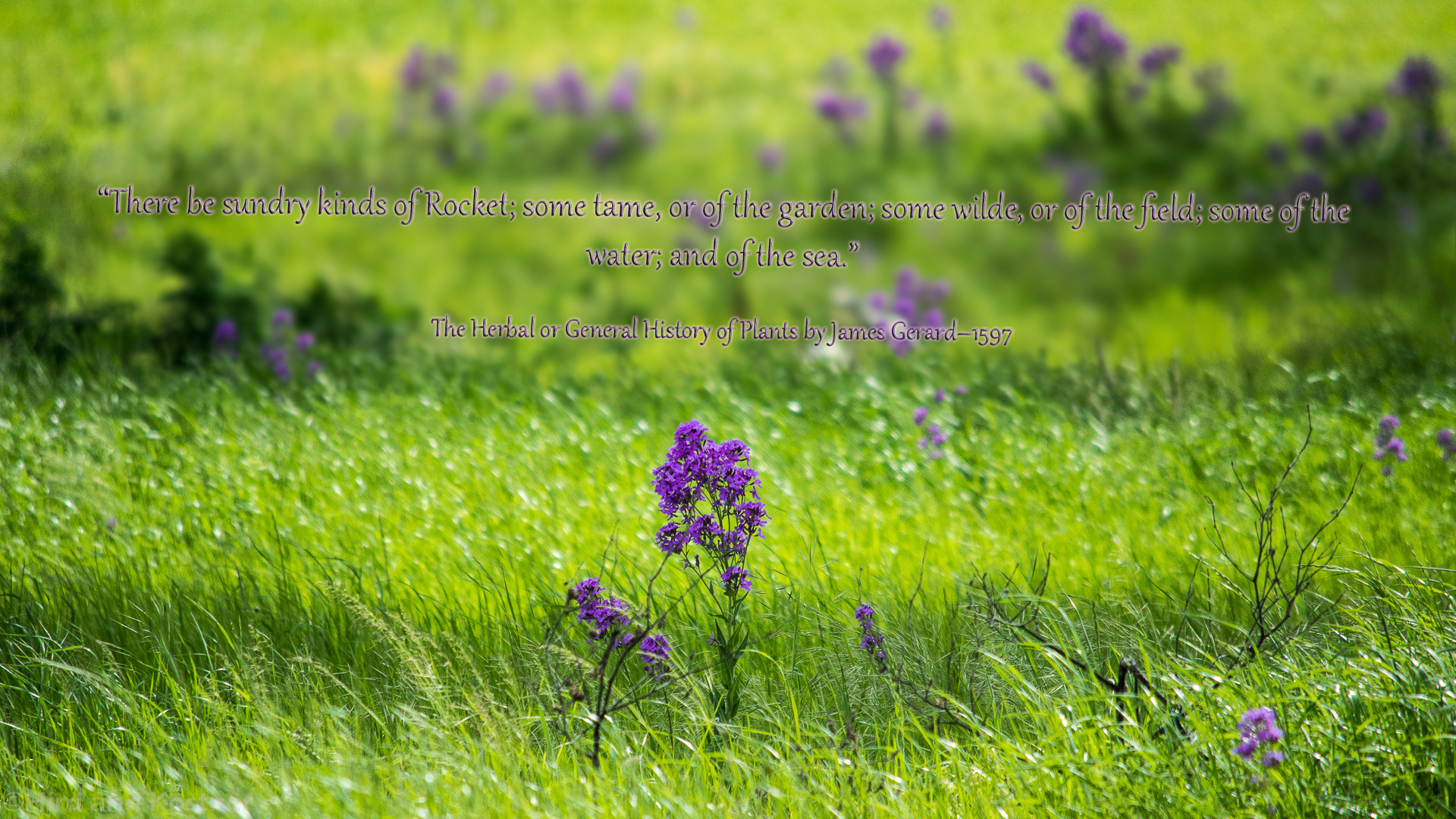 Posted at 17:30h in Nectar Flowers by Kathy 0 Comments 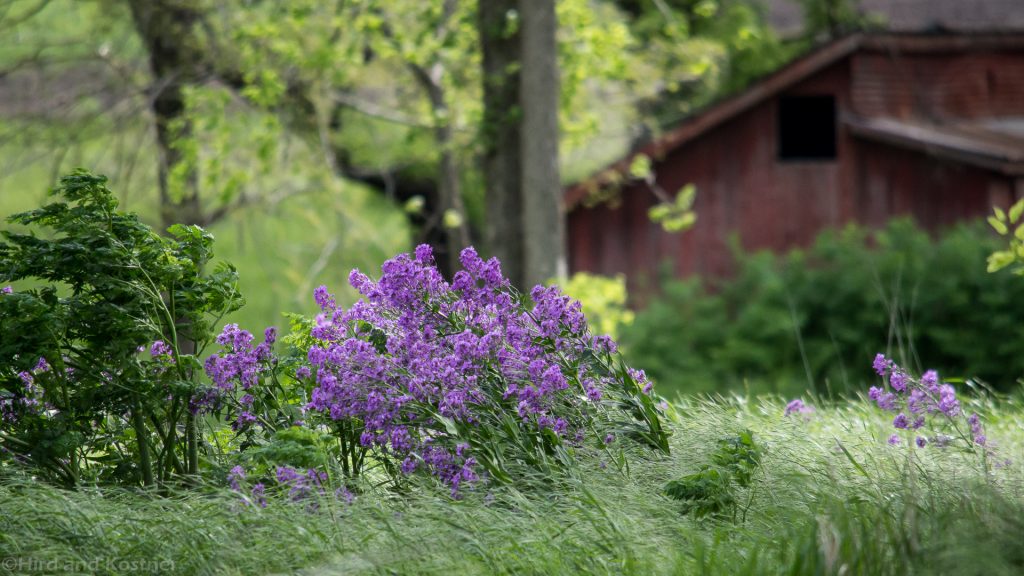 Curious about the odd use of the word “rocket”, particularly in the 1500’s which is prior to such things as rockets, the actual reference is to the French word “roquette” which translates to arugula.

In his 1597 book, The Herbal or General History of Plants, English herbalist James Gerard pens a lovely description of Hesperalis matronalis: “There be sundry kinds of Rocket; some tame, or of the garden; some wilde, or of the field; some of the water; and of the sea.” Dame’s Rocket was first introduced to this country by European settlers in the 1700’s – whereupon the seeds escaped those early gardens to naturalize widely across the Eastern portion of North America. 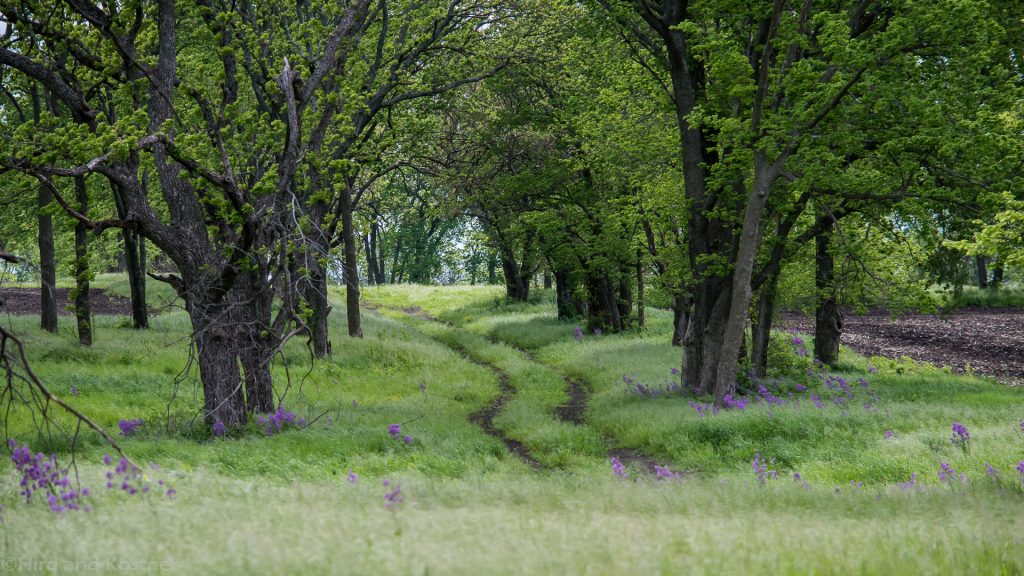 A member of the mustard family, Brassicaceae, Dame’s Rocket is both biennial and a short-lived perennial.

While out walking, there is nothing quite so elegant as coming upon a wide-open field filled with lovely clumps of violet blooms, each tall spike waving merrily in the breeze. This is especially so as enticing tendrils of fragrance waft past the nose, which invites a necessary walk through the field. This delicately scented plant sports many common names including Summer Lilac, Damask Violet, Dame’s Wort, Mother-of-the-Evening, night-scented Gilliflower. Dame’s Rocket is an integral part of our Eastern Kansas landscape, having escaped to the wild from early gardens. Its evening scent and showy blooms makes this plant a striking addition to any pollinator garden. 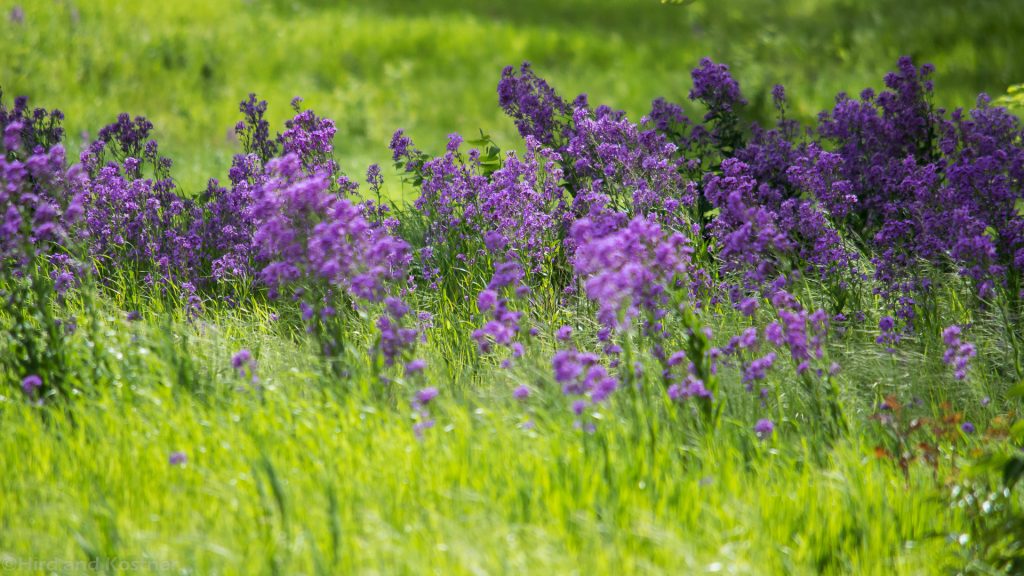 Hesperis is a Greek word for evening. It is an apt description for the glorious scent floating in the evening breeze. The word “Dame” refers to the Victorian language of the flowers, symbolizing deceit whose fragrance is only at night. The use of the Latin word, Matronalis, refers to the Roman Festival of the Matrons. 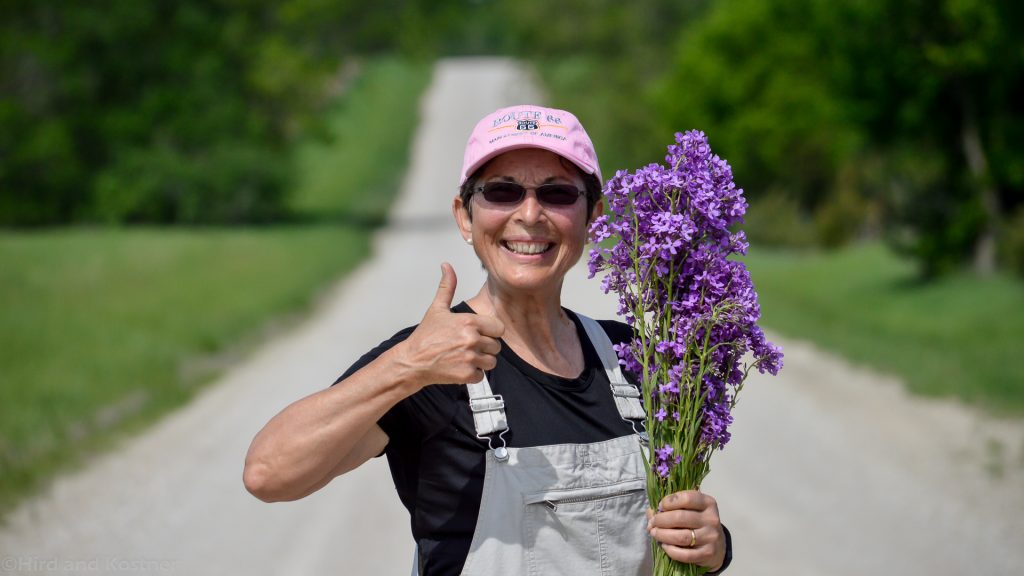 Handpicked from the field, this is the perfect Mother’s Day present for this dame. They transplant well! 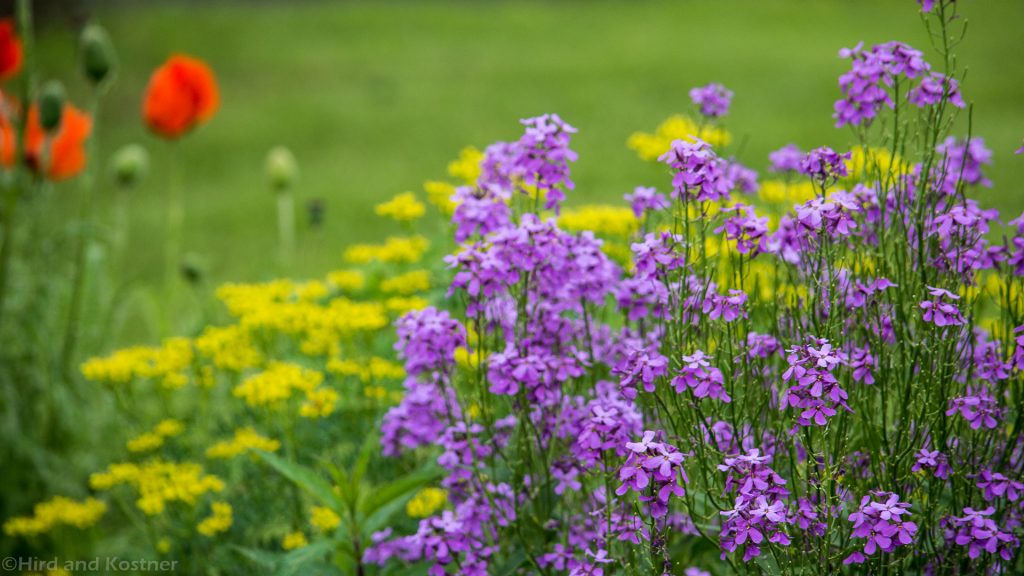 The tiny seeds of Dame’s Rocket are often found in packages of mixed wildflowers, the origin of this surprise clump that appeared three years after spreading a package of seeds.

This plant is an important food source in early spring for emerging and hungry pollinators. However, Dames Rocket is quite the prolific re-seeder, and considered invasive in some areas, so check first before scattering seeds! 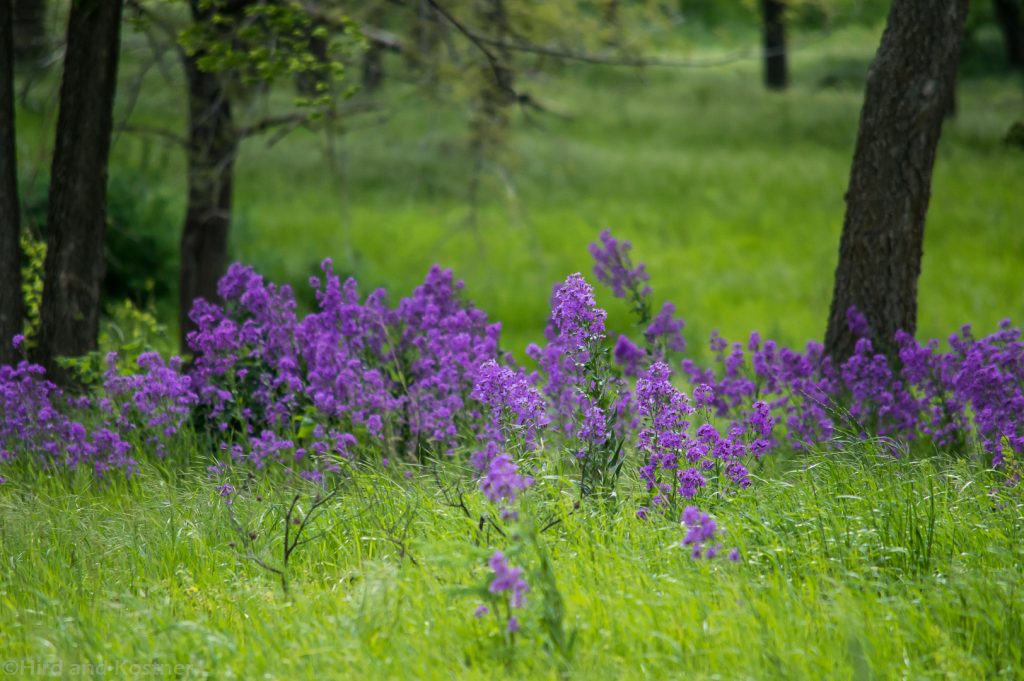 Each of these plants produce four petal flowers resembling the shape of a cross.

Biennials, Hesperis matronalis are members of the mustard or cruciferae family of arugula, radish, cabbage, wintercress, and broccoli. 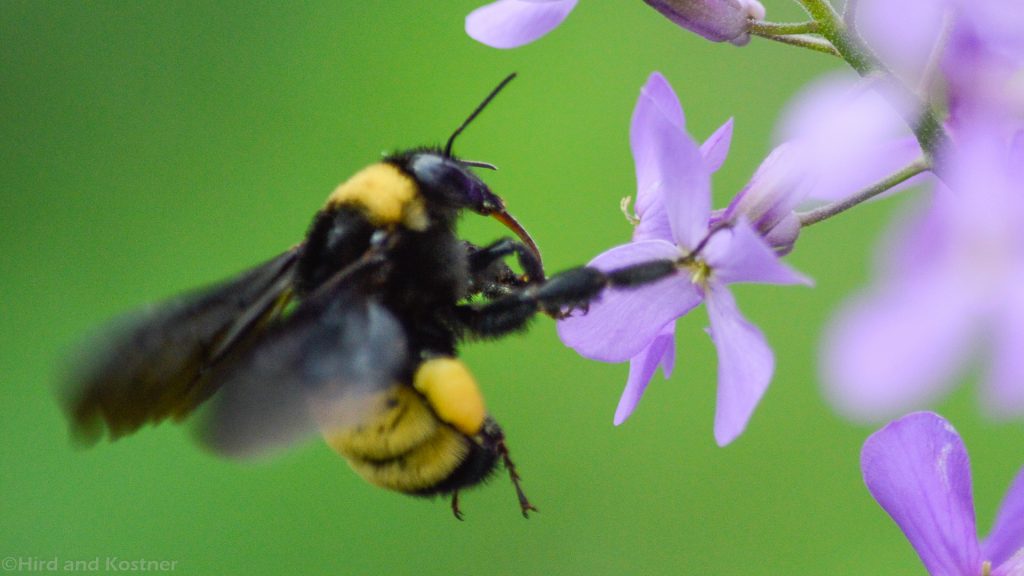 A hungry, American Bumblebee extends the proboscis and inserts a tube-like structure into the center of the flower to drink nectar using lapping motions. Pollen grains on the hairs are collected into the yellow pollen basket on the hind leg. This precious food is taken back to feed the growing larvae in the hive. 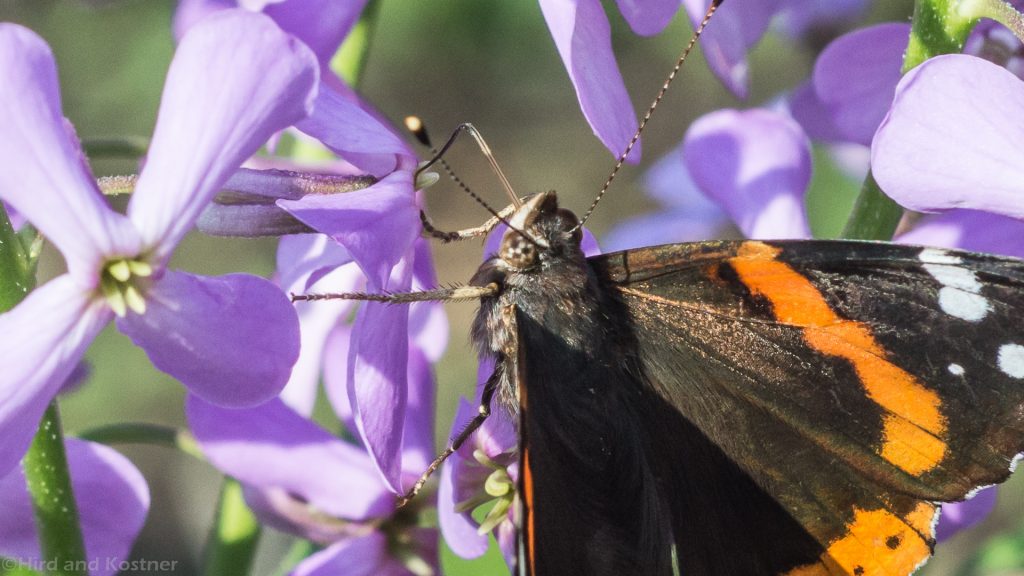 A Red Admiral sips nectar from the petal flowers of the Dame’s Rocket, which is also a host food to a number of butterflies and moths. 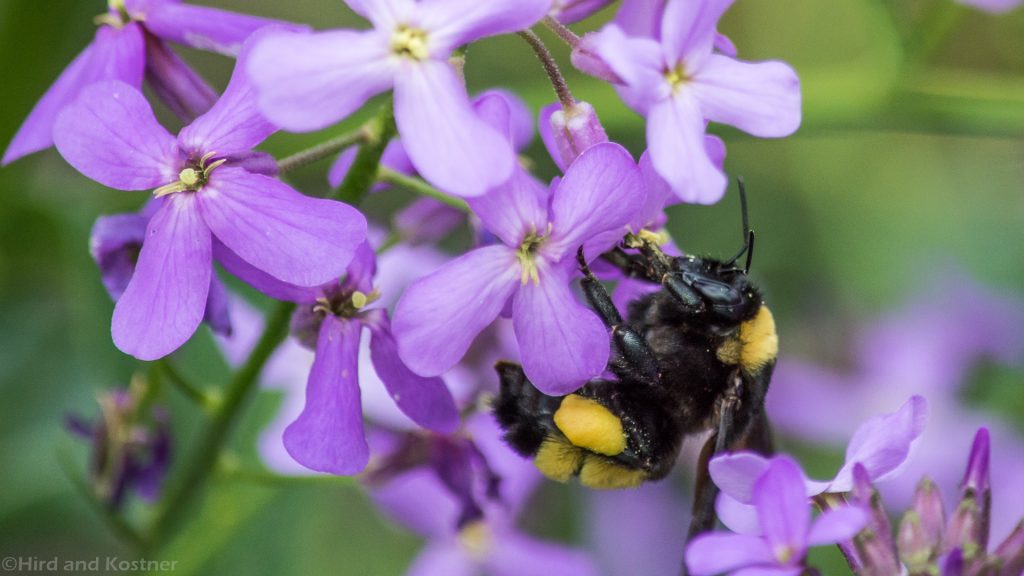 This American bumblebee finds food in the nectar-rich flowers of Dame’s Rocket.

This American Bumblebee, Bombus pensylvanicus, uses its hind legs to brush any clinging pollen grains into the yellow, pollen-carrying structure on the hind legs. When the basket is full, the bee returns to the hive to deposit the food before returning to the flowers. 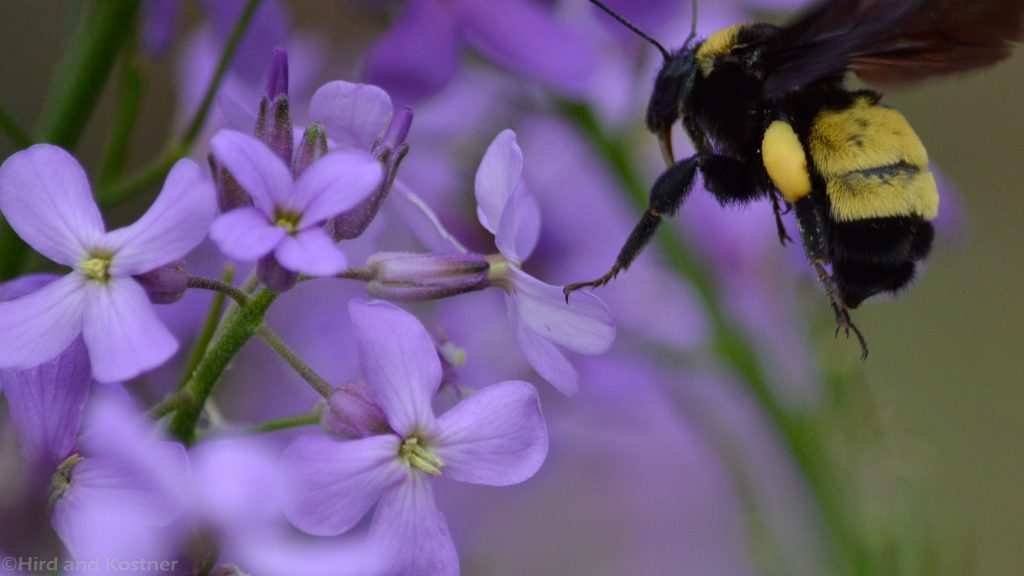 Bees of every species drink nectar from Dame’s Rocket.

The tall, spiky Dame’s Rocket is one of the most important nectar sources in our garden. Easy to transplant and fairly drought-resistant, each year we dig up new plants and move them to other places on the property so there is plenty of food. As of this writing in mid-April, the first Monarch butterfly desperately searches for nectar flowers in bloom. The only thing available is Dandelion and Stinging Nettles. It will be another week or more before the abundant Dame’s Rocket is in bloom!