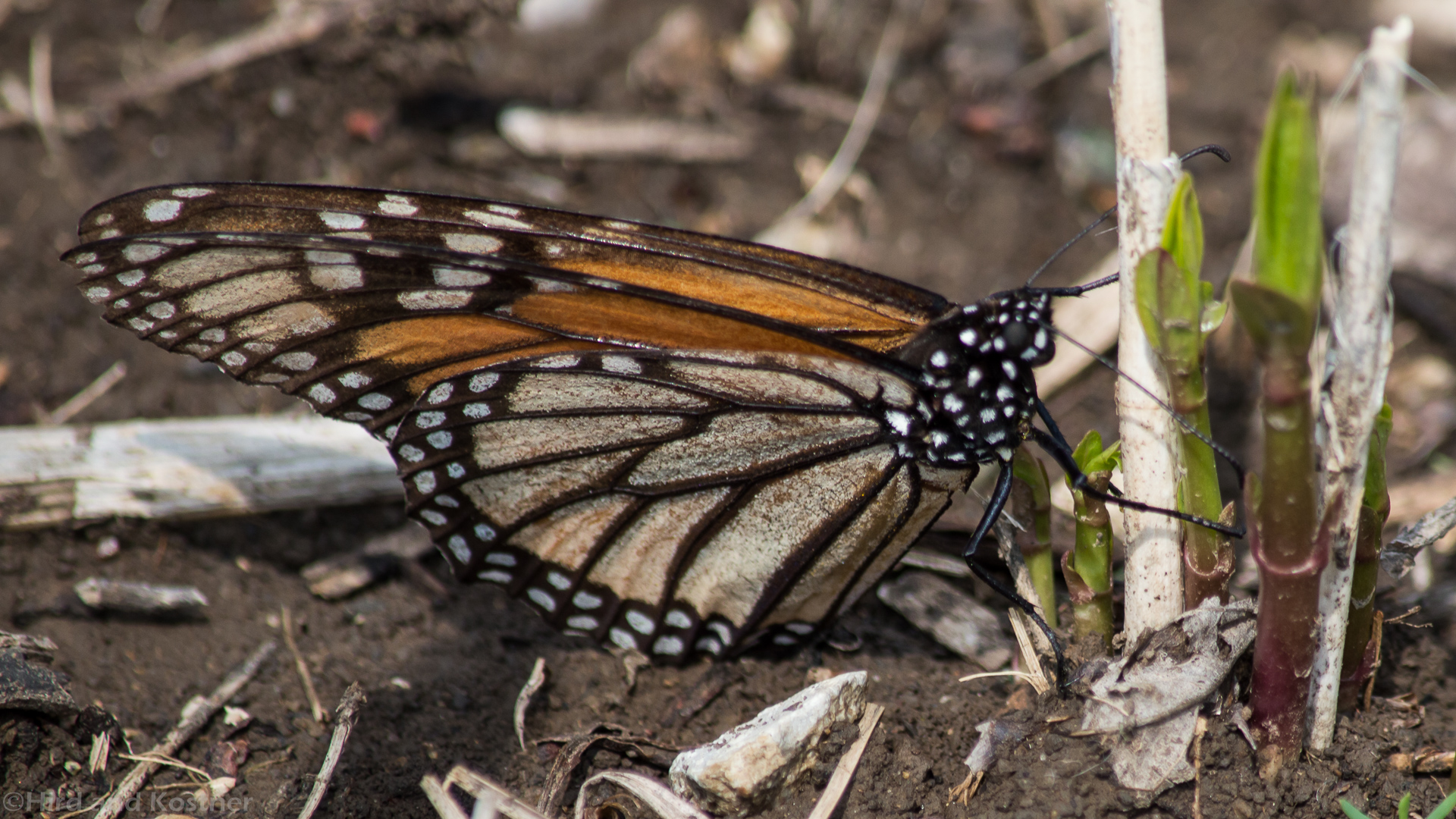 Posted at 15:02h in Butterflies, Host Plants by Kathy 0 Comments 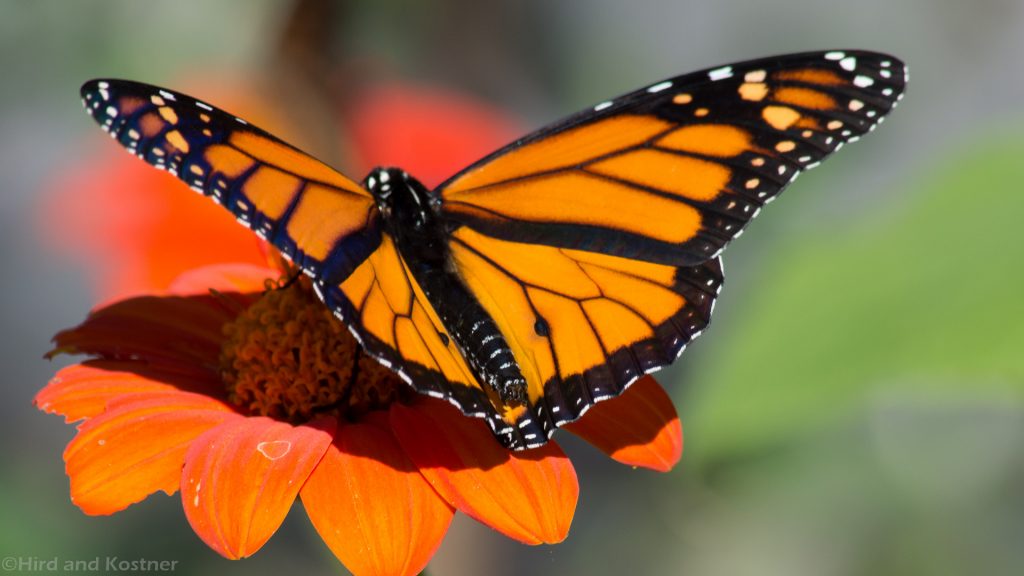 The male Monarch butterfly has two sex pouches that appear as a black dot on each hind wing. Within the abdomen are brush-like hair pencils that extend and release scents to subdue the female during mating.

Male Monarch butterflies are easily identified by the oval-shaped pads located along the inside vein of each hind wing. These hind wing patches are scent pads that produce pheromones to attract female Monarch butterflies. The male also has two claspers on the end of the abdomen that hold the female during courtship. A male can mate one or two days after emerging from the chrysalis and can mate many times during its life. 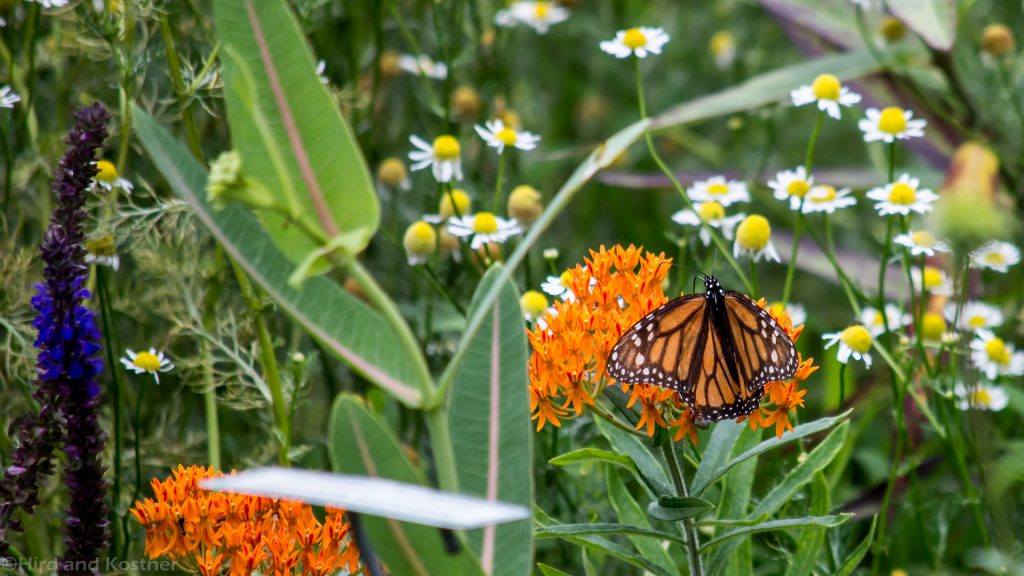 The female Monarch butterfly is darker than the male and has thicker black veins on her wings.

The female Monarch butterfly has slightly darker wings than the male, but she lacks the two black spots found on the male. Also, the tail end of her abdomen appears different from the male. On the female, the black veins on her wings are thicker, more pronounced; on the male, these same veins are thinner. Females can mate immediately after emerging from the chrysalis. Females can mate several times during their life span.

With four successive broods, the first three, summer Monarch generations live two to five weeks. Each September and October, the fourth, and final, generation enters diapause which halts reproduction. Diapause conserves precious energy required for the butterflies to make the flight to the fir forests of middle Mexico. Monarch butterflies overwinter in massive clumps, clustered together in these fir trees, to conserve heat and sustain life until weather conditions permit them to return to the US during spring migration—where they mate and die. 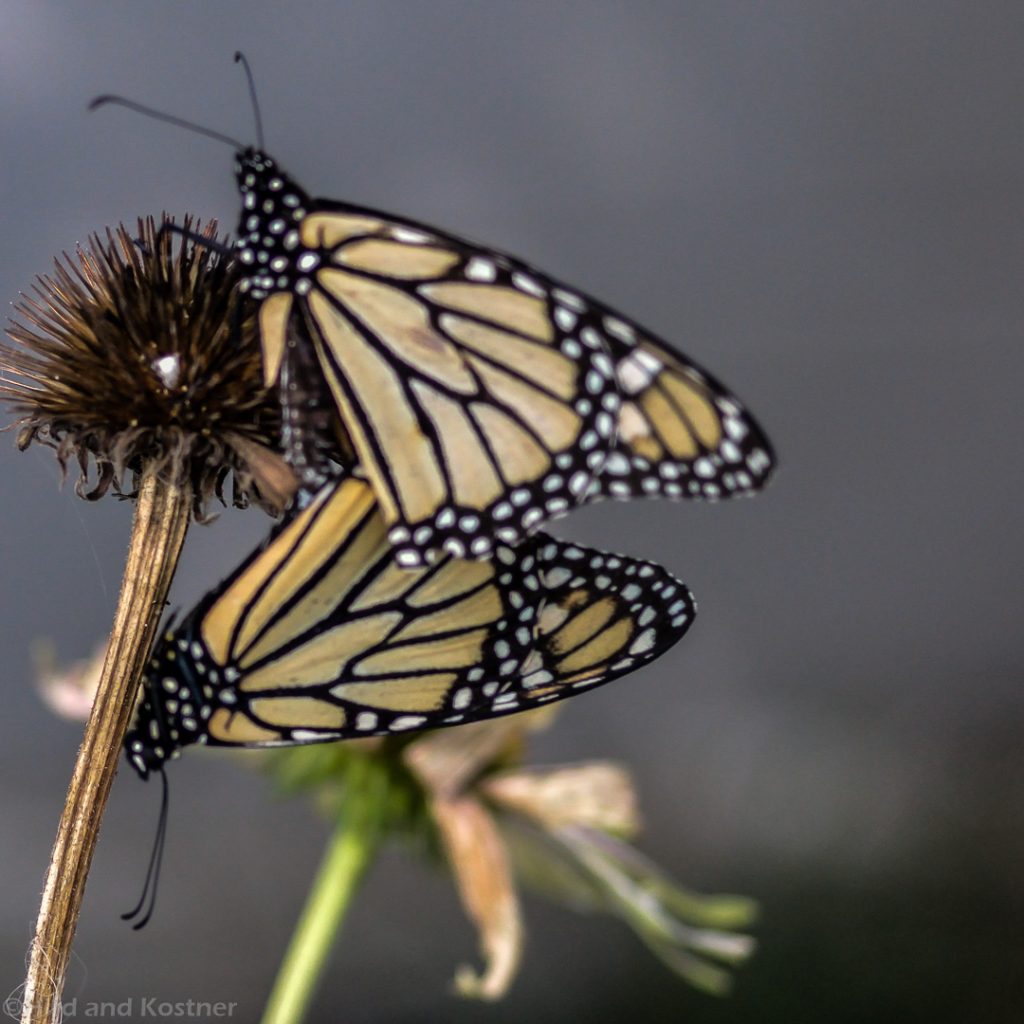 The purpose of the adult butterfly is to mate and reproduce by laying eggs on the host plant, milkweed, which is the sole host food for Monarch caterpillars. Mating is accomplished by end-to-end coupling during the ground phase.

Mating is a two-step process involving an aerial chase and the ground phase. The male’s two sex pouches are made of specialized scales with chemicals that release pheromones in the sight of a female and are designed to attract the female. During the spectacular aerial dance, the male entices the female into mating. Mating occurs immediately after the female accepts the male. Claspers at the end of his abdomen help to hold the female during the end-to-end, coupling ritual. The courtship dance is often a lengthy process and can last over twenty-four hours.

During coupling, the male passes sperm to the female through a sperm packet or spermatophore. As the eggs travel down the female’s egg-laying tube, the sperm fertilize them. It is thought this sperm packet also provides the female with energy sources for reproduction and migration. 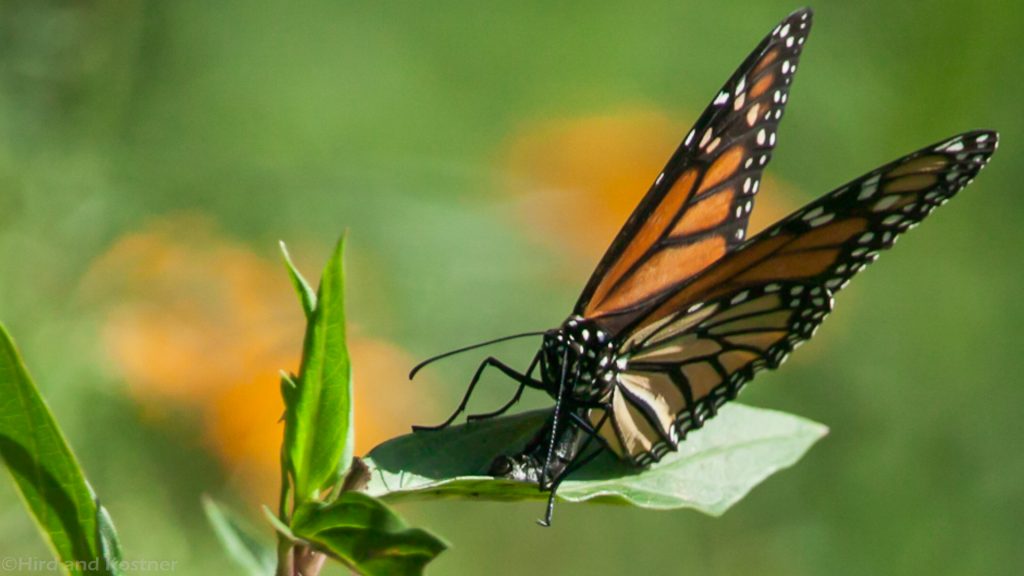 This female Monarch flits around the Swamp Milkweed (Asclepias incarnata) host plants, then with that distinctive tuck of the abdomen, she deposits a single egg on the host plant before moving on to the next plant.

The female Monarch will mate and produce eggs several times. In her lifetime of two to five weeks, she can lay between 100 to 300 eggs. When milkweed is plentiful, the female endeavors to deposit one or two eggs on a single plant to ensure the hatched caterpillars have sufficient food to survive the growth process through five instars (molts) before pupating into the chrysalis stage. A voracious caterpillar can strip a milkweed plant of its leaves. 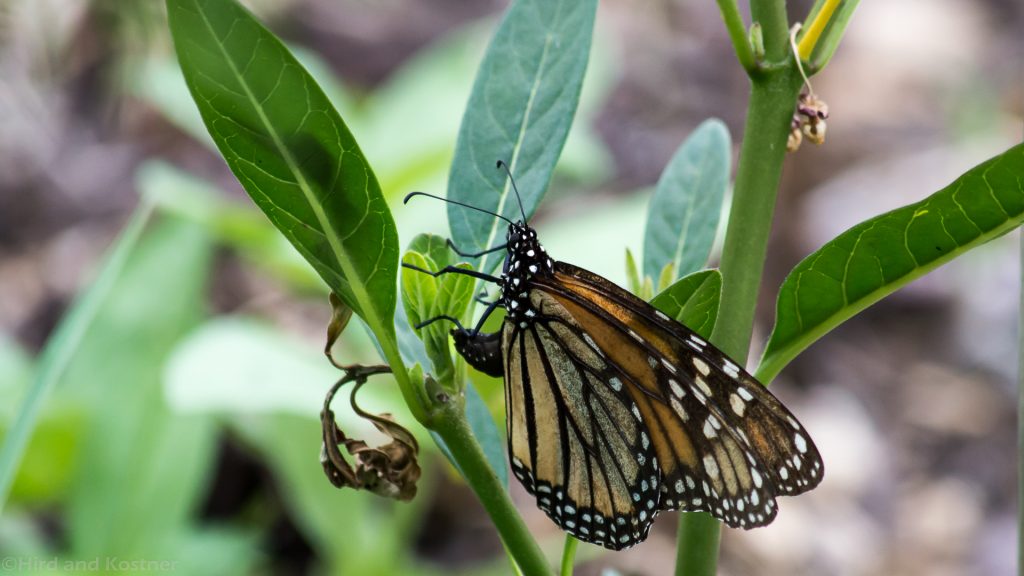 The latest arrival recorded here at Lepidoptera Buffet for the spring migration was on June 21. Upon arrival, this tired, female Monarch drank nectar from a Coneflower for a very long time before going about her business to deposit eggs.

Weather can have a heavy impact on the Monarch migration along the Central Flyway. Cold, drought, storms, flooding all drastically reduce the number of northbound butterflies. One season, after heavy flooding in Texas and Oklahoma, it was late June before the first Monarch arrived at Lepidoptera Buffet. This tattered and faded female quickly deposited eggs on many milkweed plants and our caterpillar season commenced! It only takes one female to get things started! 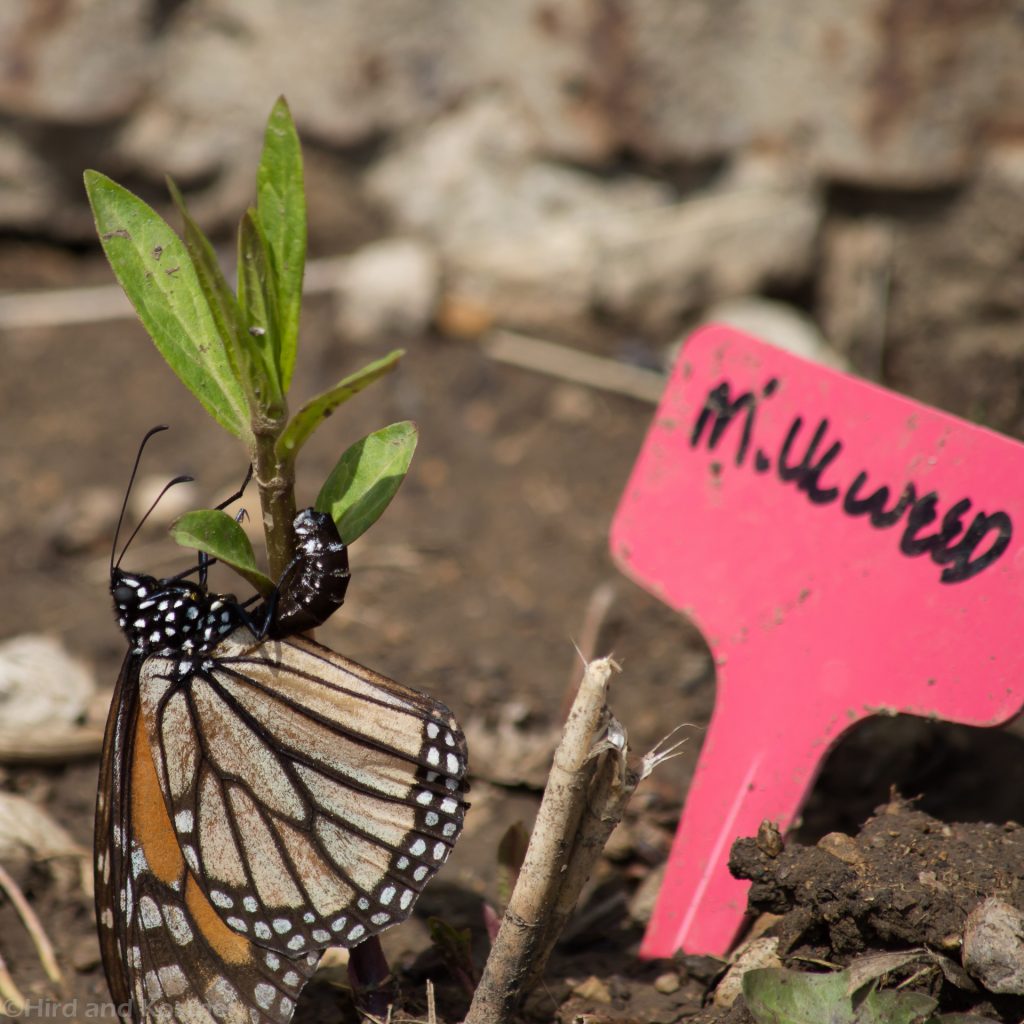 With predictably unpredictable weather patterns, April 12 is the earliest recorded arrival, even before the milkweed has barely emerged from the ground. This female Monarch butterfly makes a bee-line to deposit her eggs on a tiny milkweed seedling. We laughed thinking she might’ve read the sign!

Much to our surprise, several female Monarch butterflies arrived on April 12—the earliest date recorded at Lepidoptera Buffet. Busy males performed the courtship dance, twirling and swirling high into the air to entice the female. Enthralled, we watched as this particular female floated just above the ground, repeatedly touching every single plant in the garden in a frantic search for tiny milkweed plants where she could safely deposit her eggs.

Typically, the Asclepias syriaca (common milkweed) and Antelopehorn (Asclepias viridis) emerge in mid-April. These plants emerged from the ground only a few days prior with warming temperatures. The plants are less than 3 inches, and many are covered with eggs. Monarch caterpillars of various instars, if faced with food shortage, the larger, more advanced, cats will consume the smaller instar caterpillars. 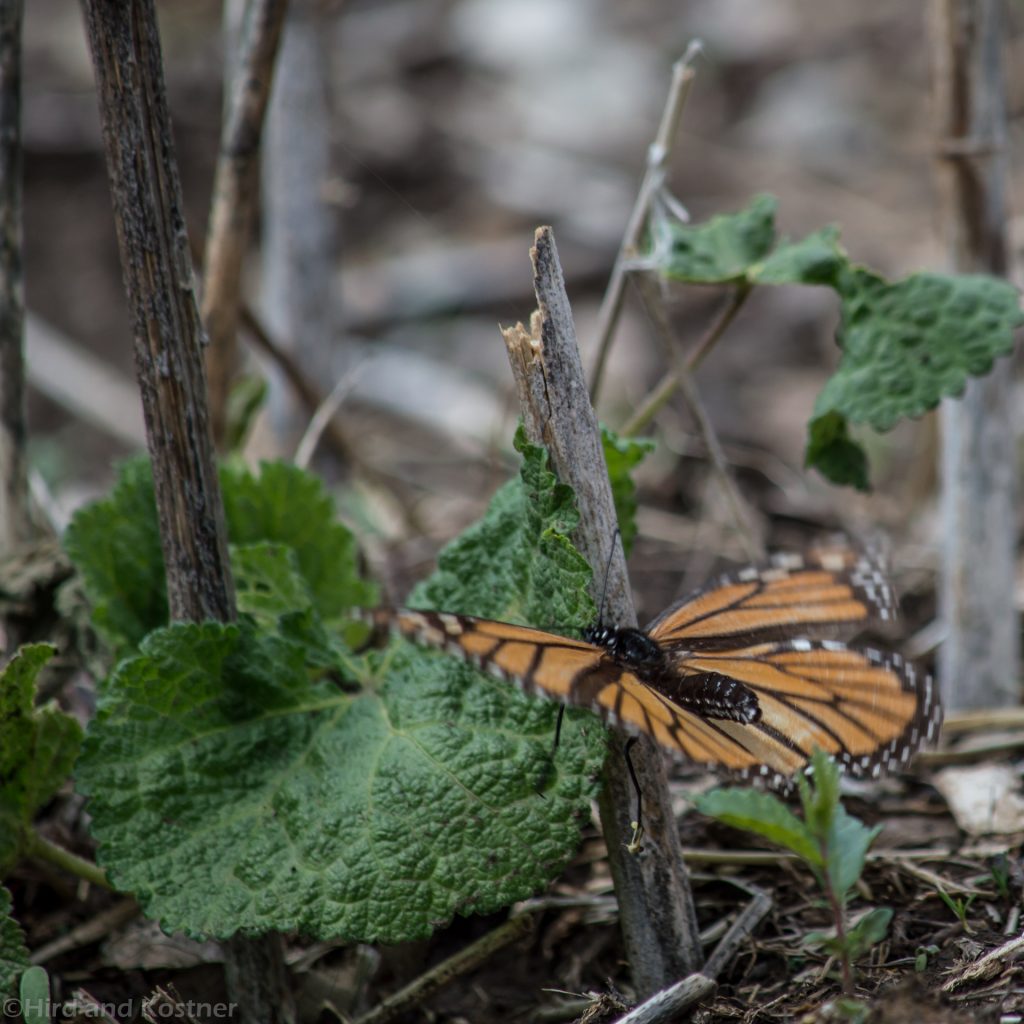 This female touches the Hollyhocks for a brief moment before moving to the next plant in her desperate search to find milkweed where she can deposit eggs.

Under normal conditions, the female Monarch will leave one egg on a leaf, one egg per plant, usually near the top, to ensure the caterpillar has enough to eat. One caterpillar can consume all the leaves of an entire milkweed plant. Hence, our yearly request for everyone to plant milkweed. 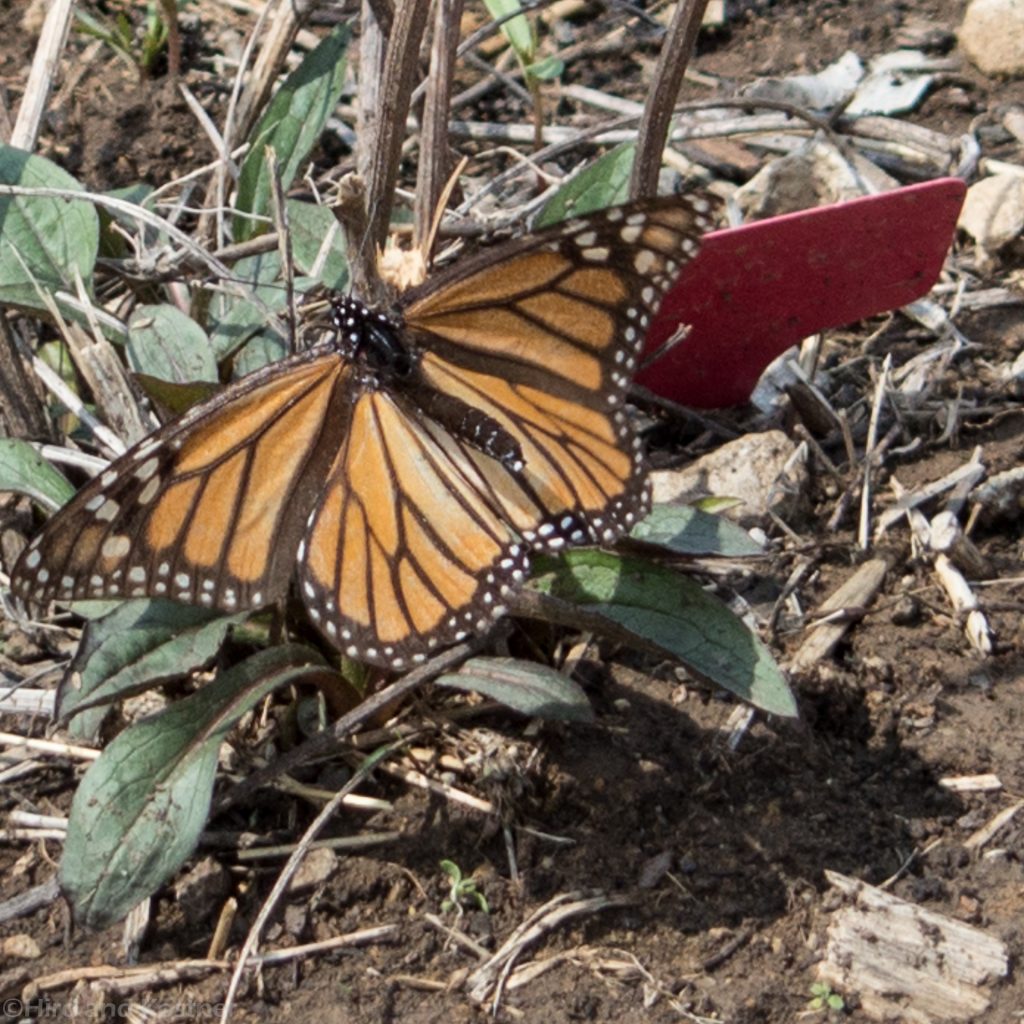 This female Monarch has touch sensors on the feet to identify which plant is milkweed.

The survival of the species is dependent upon the female Monarch choosing the right plant; it must be a member of the Asclepias family of plants. She lands less than a second on this Coneflower before moving to a one-inch milkweed. All four of her clawed tarsi grab the plant. The taste receptors on her feet identify the Asclepias plant. She stops, tucks her abdomen, and deposits several 2mm, cream-colored eggs. These caterpillars will emerge in four to ten days, consuming the waxy egg shell as their first food. 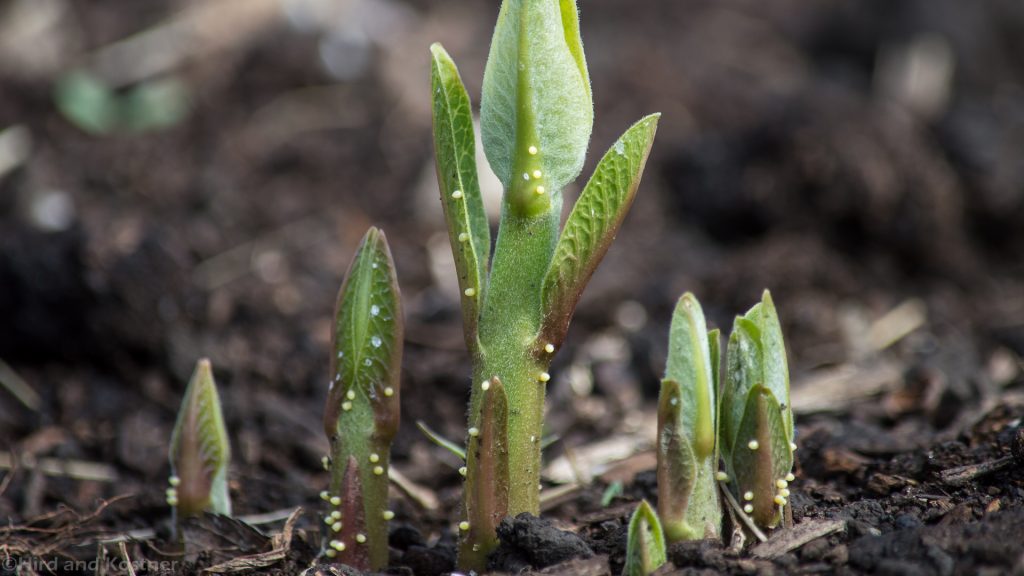 There won’t be enough milkweed to feed this many eggs as they hatch into caterpillars. All of the milkweed plants are covered in eggs. Such is Mother Nature at work. Some simply will not make it because the stronger cats will eat the weaker caterpillars.

After years of planting hundreds of milkweed, collecting seeds to replant, the Lepidoptera Buffet habitat has expanded to nearly fifteen acres. It is a thrill to see so many eggs at one time. Look for the gifts on a wing and a prayer!

Authors: Kathleen Hird Kostner and Ricardo Kostner
©Hird and Kostner | Reproduction only with written permission from the authors.