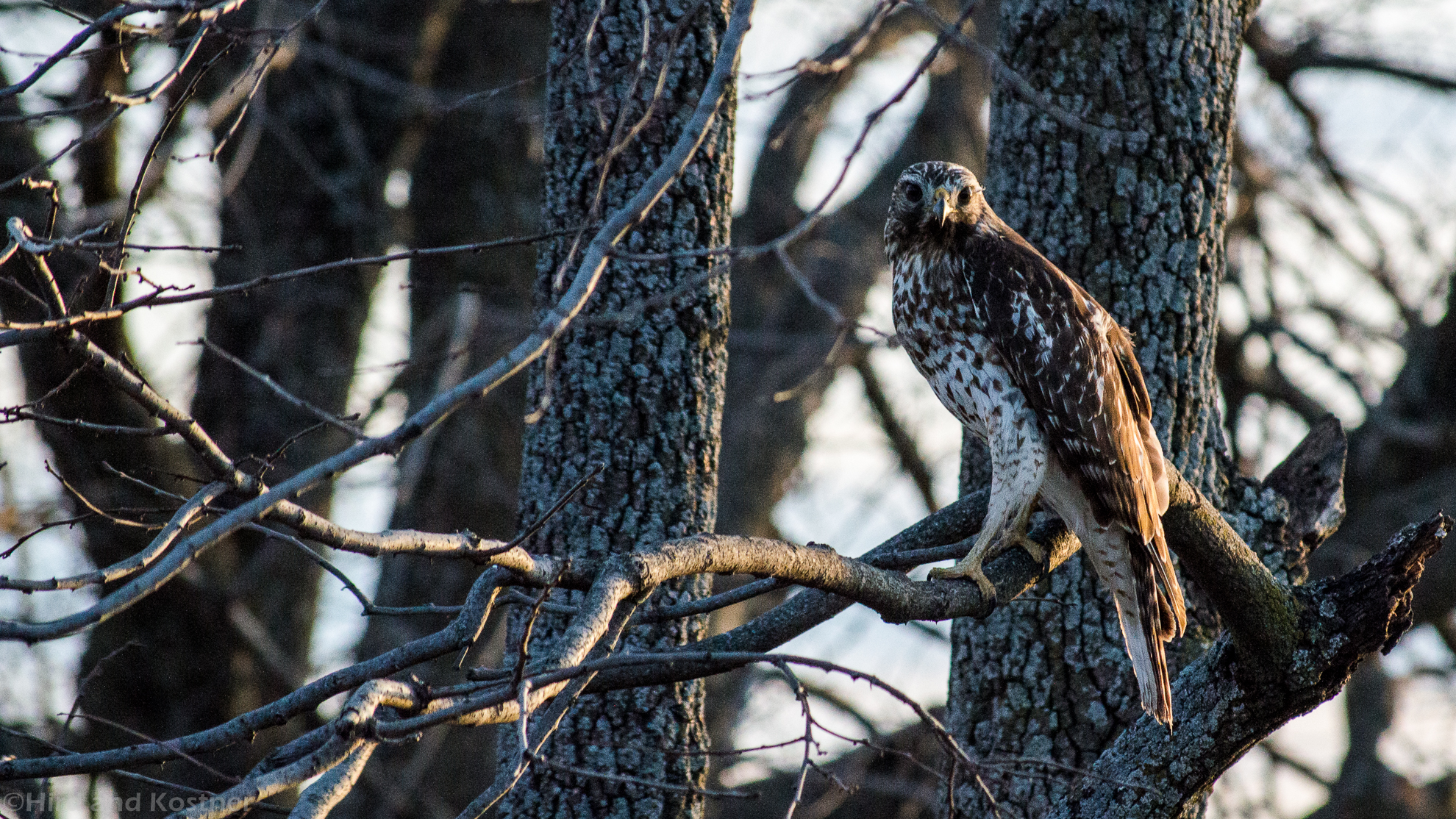 Posted at 17:46h in Birds by Kathleen Hird Kostner 0 Comments

Many acres of undeveloped fields and forests surround Lepidoptera Buffet, which is, as a crow flies, conveniently located between the heavily forested, northern shore of Clinton Lake State Park and the thick woods meandering along the steep banks of the Kaw River. Open fields, riparian, and deciduous woods create a diverse habitat for many pollinators, wildlife, and birds that reside within these spaces.

The topic of our story is the Red-shouldered Hawk, Buteo lineatus. It is a medium sized bird of 17-24 inches with a 36-48 inch wingspan. Members of the Accipitridae family, hawks are fearsome, diurnal birds-of-prey. They are identified by prominent hooked beaks and sharp talons.  These high-soaring raptors have extremely sharp vision, the eye structure is similar to binoculars. They often hunt from perches before dropping to the ground to capture small mammals, reptiles, frogs, or insects. Several types of hawks reside in this row of deciduous trees along the property line. 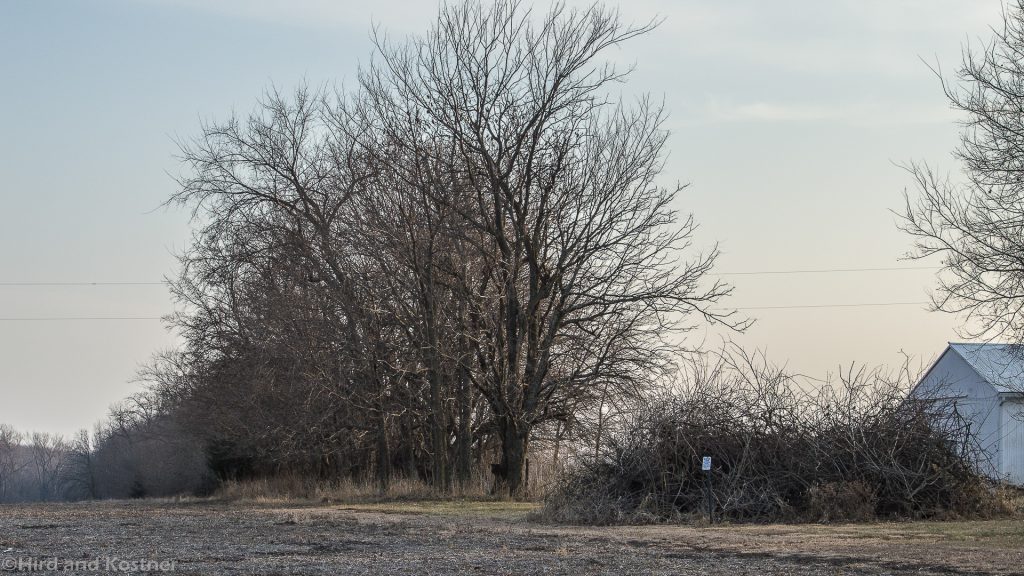 With encroaching human development of land, these old trees, planted at the turn of the 20th century to mark property lines, provide habitat for local wildlife. This row of deciduous trees stretches one-half mile—from road to road. Nests built by industrious squirrels and large birds dot the canopy, each constructed in the safety of sturdy branches that reach high above the forest floor. We call this row of trees Crow Alley since the crows chase the hawks at every chance.

The mature Red-shouldered hawk, photographed while perched on the old hedge post marking the S property line, has a short, broad tail with rufous shoulders and rusty barred breast. However, as we learned, the juvenile Buteo hawks can present with extensive variations which can make identification a bit more challenging. 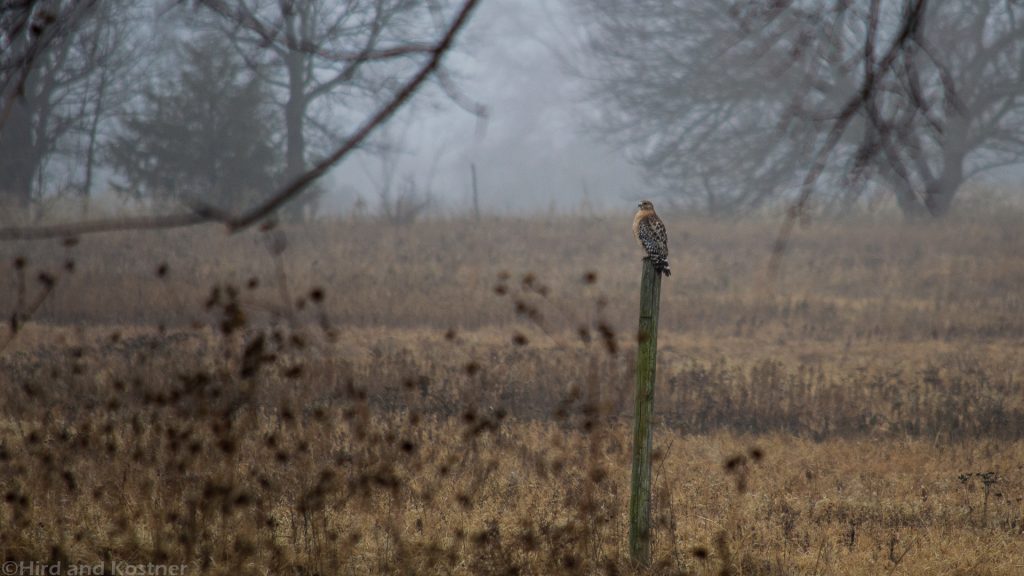 Accipiter hawks hunt in open fields and have adapted to fast turns and low flying in woodlands forests. This Red-shouldered Hawk uses this hedge post while watching for the slightest movement that might indicate a rodent or a reptile.

As is characteristic of some Buteo hawks, the Red-shouldered raptors hunt with slower wingbeats,  followed by powerful, low glides and quick turns. 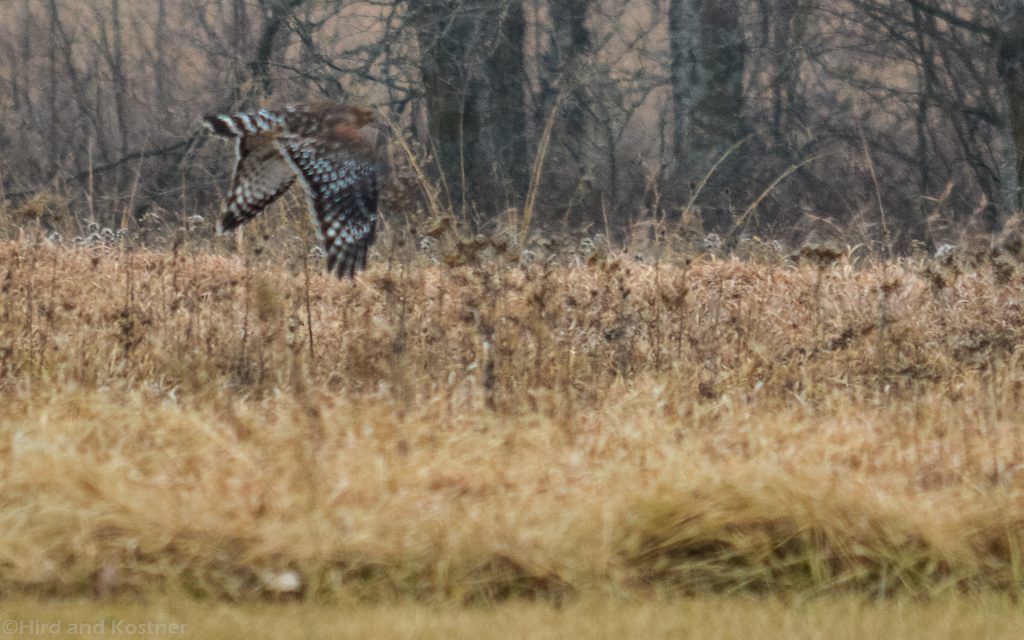 Our story takes place just before sunset on a cold January day. The setting sun looked like a fiery cauldron pouring molten gold into the horizon. The sky was illuminated with intense reds and deep pinks, splashed like paint across a giant canvas. Inside the house, while working on our computers, we could see the studio windows beautifully ablaze with the reflections of the sky. It was a typical January sunset. 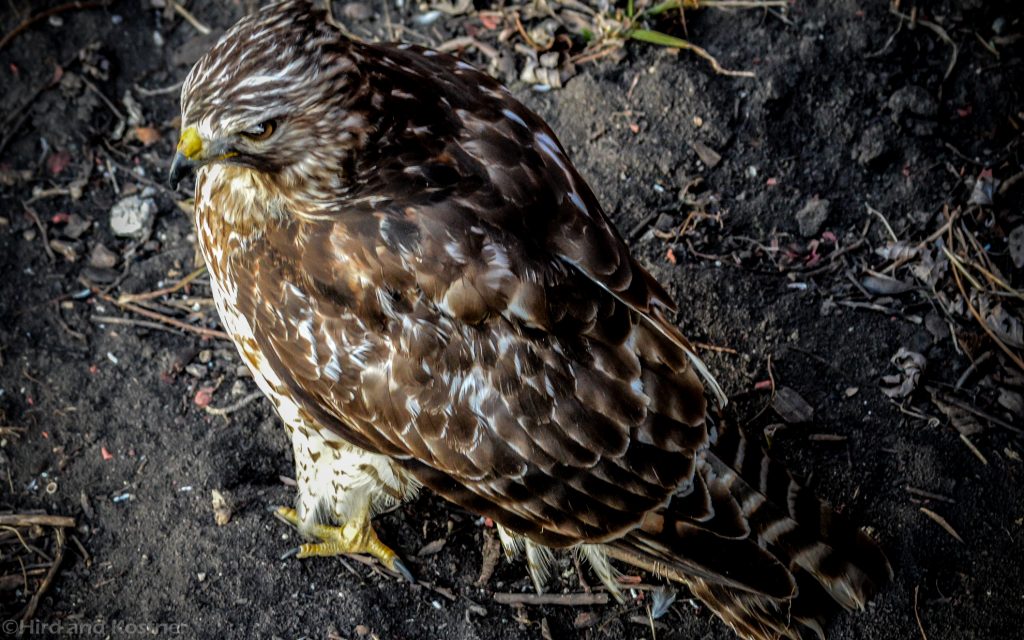 Reeling and unsteady from hitting the window, this juvenile Buteo hawk stands up after being knocked unconscious for several minutes.

Suddenly, a noisy ruckus erupted with squawking and flapping wings as the large flock of small birds scattered, hither and thither, away from the feeders. It was utter chaos for one second, but then, a deadly silence prevailed.  I looked out our southern view from the living room window as a hawk swooped from a low branch of the Persimmon tree towards the house. The penetrating eyes were focused on the feeders, the powerful flapping of the wide wings created inertia like a speeding bullet; the huge bird’s trajectory was aimed straight toward the one bird feeder hanging from a shepherd’s hook—just a few feet from the windows.

All the little birds simply vaporized as if they performed a magic trick, disappearing into thin air to avoid those sharp talons. Some darted under the deck, while other flapping wings dove into the tangled branches of the Althea bush. 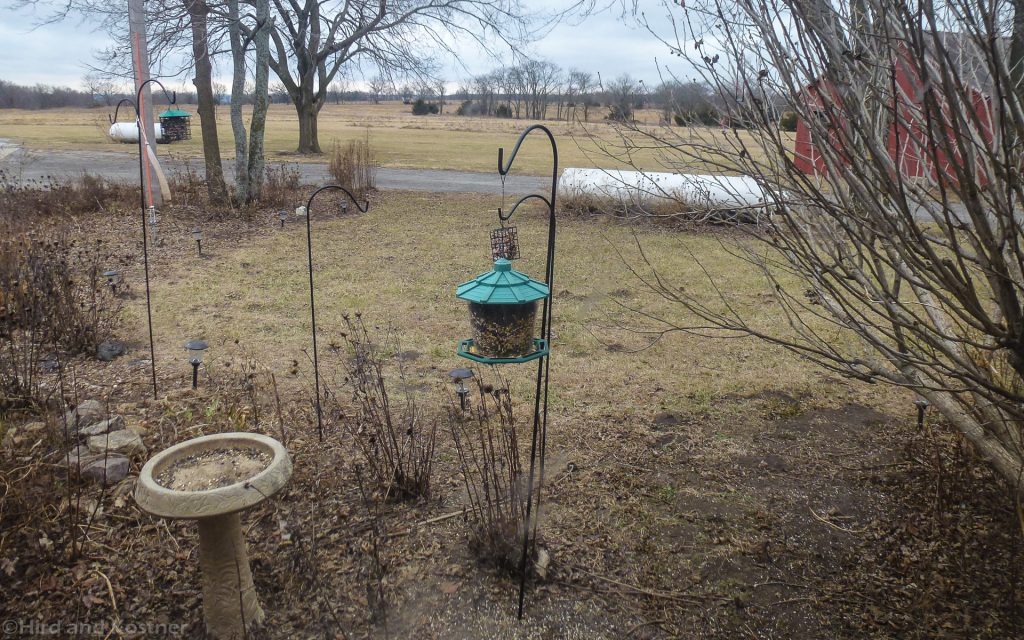 Opportunistic hawks hunt small birds that cluster around this feeder.

Despite the disappearing act, the hawk spied dinner ahead. Seemingly oblivious to the immediate danger, one Dark-eyed Junco, Junco hyemali, remained noshing seeds at the feeder. The fearsome eyes of the hawk focused on the Junco, the yellow claws ready to snatch the bird for supper. In a hair-raising split-second, the Junco dashed under the deck to safety. Failing to catch the slate-gray bird, the momentum powered by those broad wings propelled the bird straight into unseen danger.

Unfortunately for this inexperienced young hawk, the flight path appeared to have pink sky on the other side of the feeders. Apparently confused by the intense reflections emblazoned across the glass, the hawk smacked headfirst into the window, dropped like a sack of taters, and landed on its back. With such a loud impact, we thought surely the glass hurt the bird. 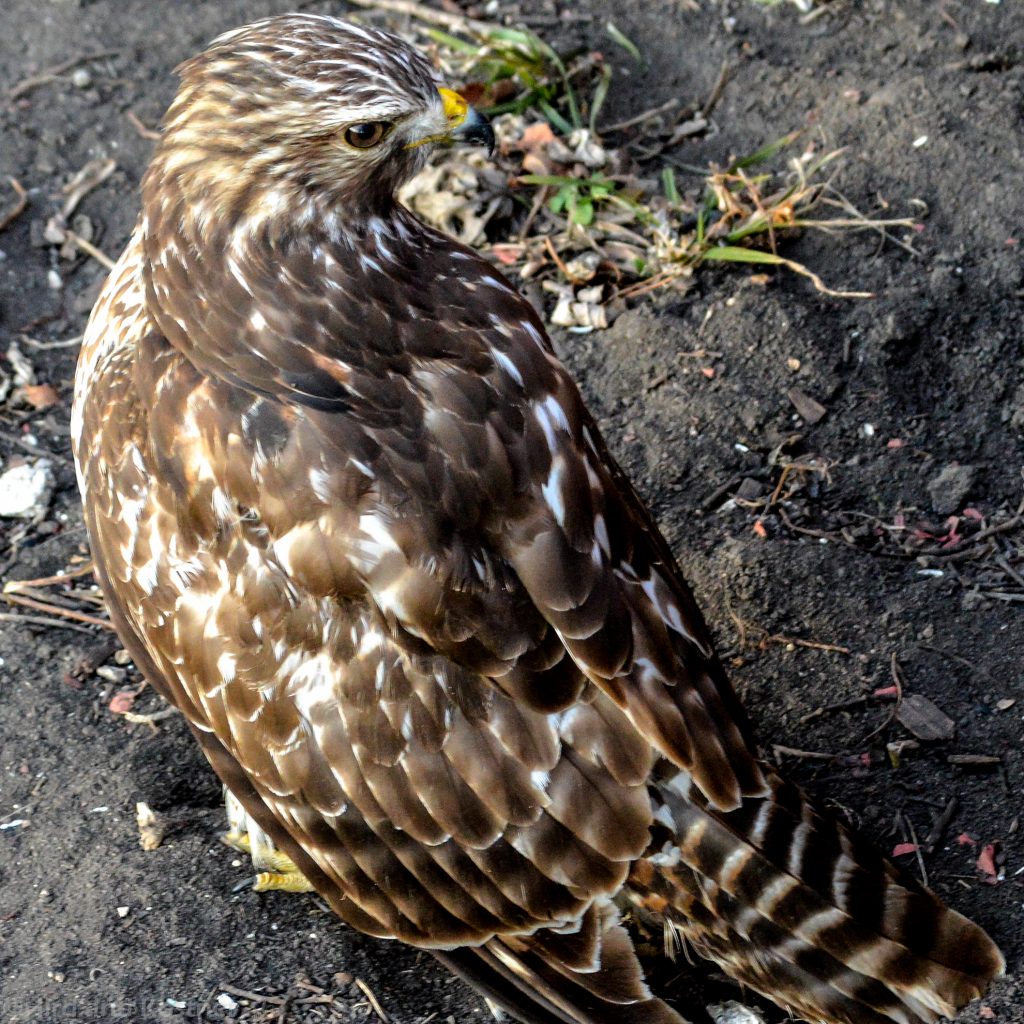 Intent upon catching a Dark-eyed Junco for supper, instead, this inexperienced hunter hit the window in a mighty crash.

Rushing outside, we stood on the deck watching the beautiful hawk, hopeful for any movement. Still flat on its back, the large bird laid absolutely motionless for several minutes—those deadly yellow feet and talons pointing straight up in the air.

Suddenly, the stunned bird flipped itself upright. Looking around, disoriented, the young hawk stood unsteadily for several minutes before flying back to the same perch in the Persimmon tree. We observed each other for a good fifteen minutes, the luminous eyes of this majestic young raptor reflecting such intelligence and, understandably, wariness. 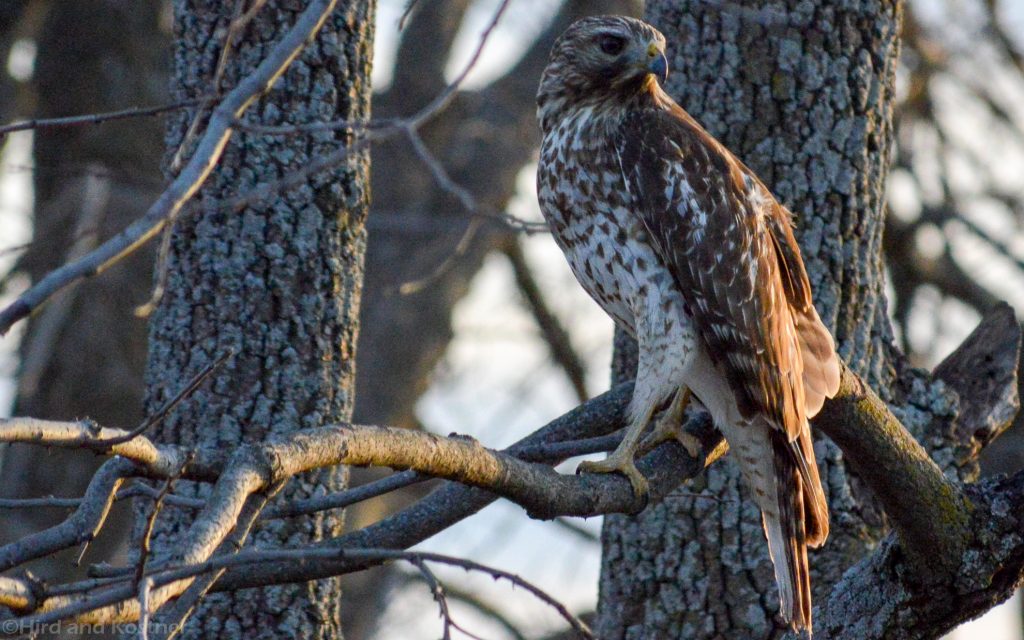 This young Red-shouldered Hawk perches on the Persimmon tree branch after taking a walloping to the head. This particular photograph helped identify the bird by the white and brown streaks across the head, and splotchy, teardrop markings on the breast, and the shorter, wide, squared tail.

Opportunistic hunters, hawks often strike prey near bird feeders which explains that bold swoop from the Persimmon tree. Identifying this particular hawk took a fair amount of digging through books and comparing pictures to determine if this was an immature Red-shouldered Hawk or perhaps an immature Cooper’s Hawk. There are so many hawks to learn. 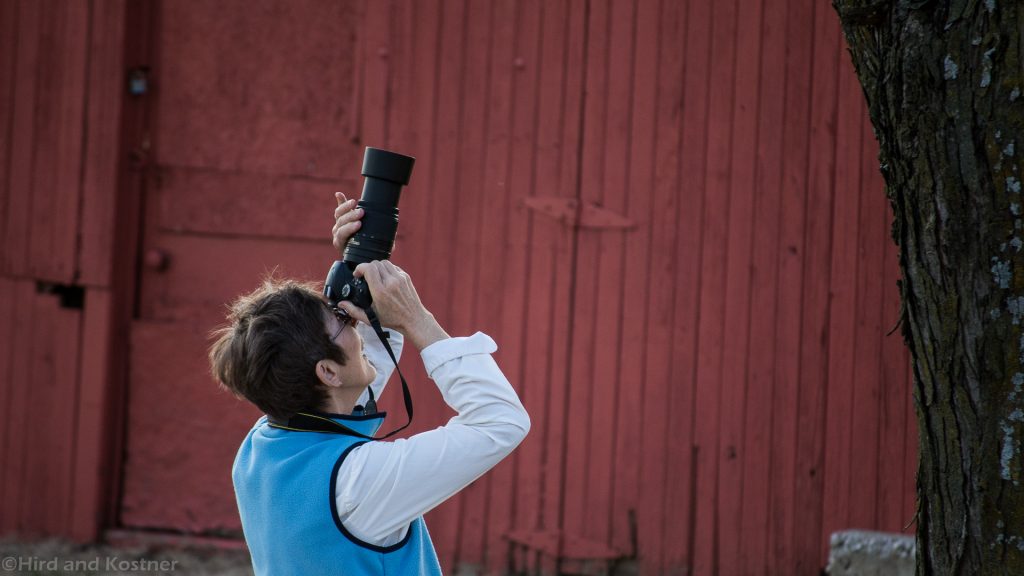 Hawk watching with a long lens helps to identify the bird. This particular hawk left the safety of Crow Alley, swooping around the property in a large circle before zooming in to dive bomb the bird baths filled with splashing Bluebirds and Cardinals.

With curiosity now piqued after this first hawk encounter, no longer can we simply point to the sky and say, “Look—a hawk!” We want to identify the bird by name. So, we now use our cameras with long lenses to photograph as much of the identification is through wing shape, color, and banding. 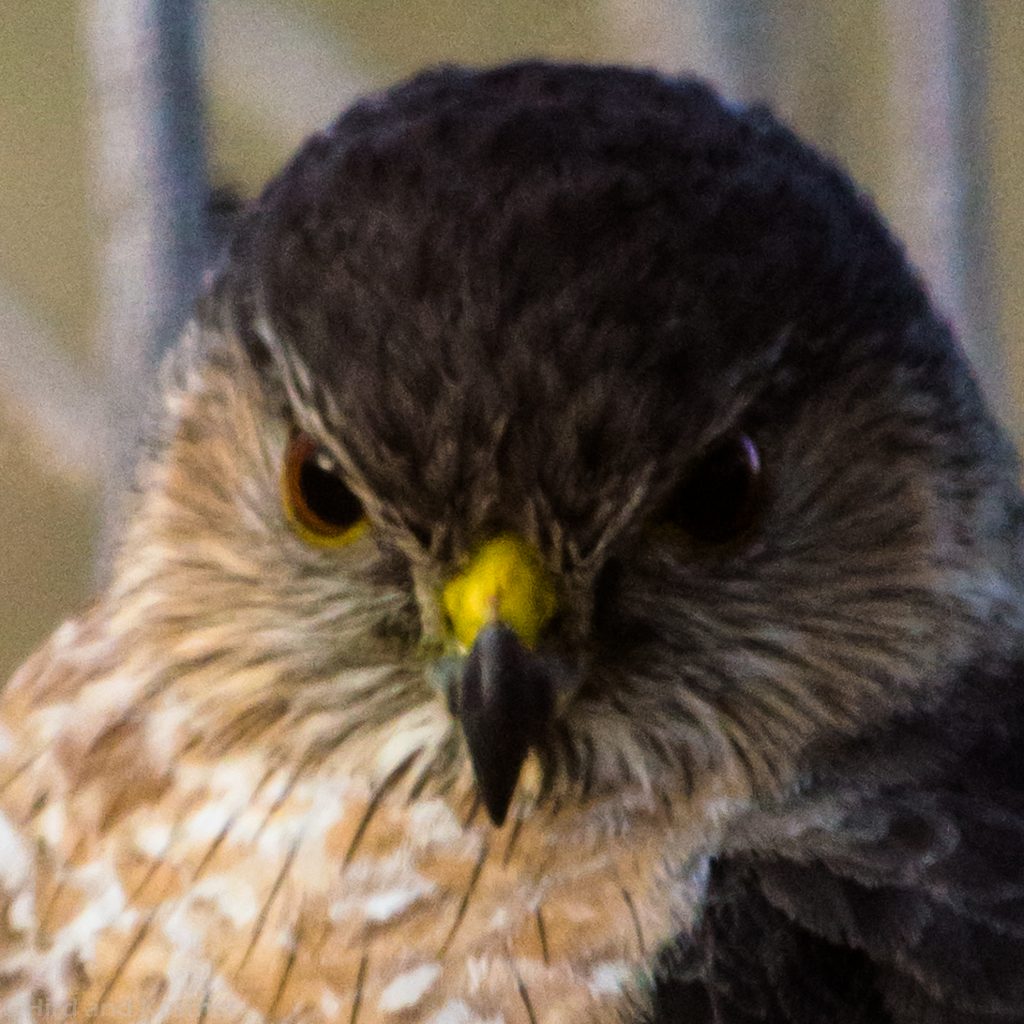 Birding requires study and memorization of distinctive features. Juvenile accipitrids often present with similar characteristics.  The Cooper’s Hawk, Accipiter cooperii (pictured above) has a longer, round tip tail where the Red-shouldered Hawk has a shorter, broad, square tip tail. The yellow cere, characteristic of most Accipitrids, is the fleshy membrane across the base of the upper mandible. 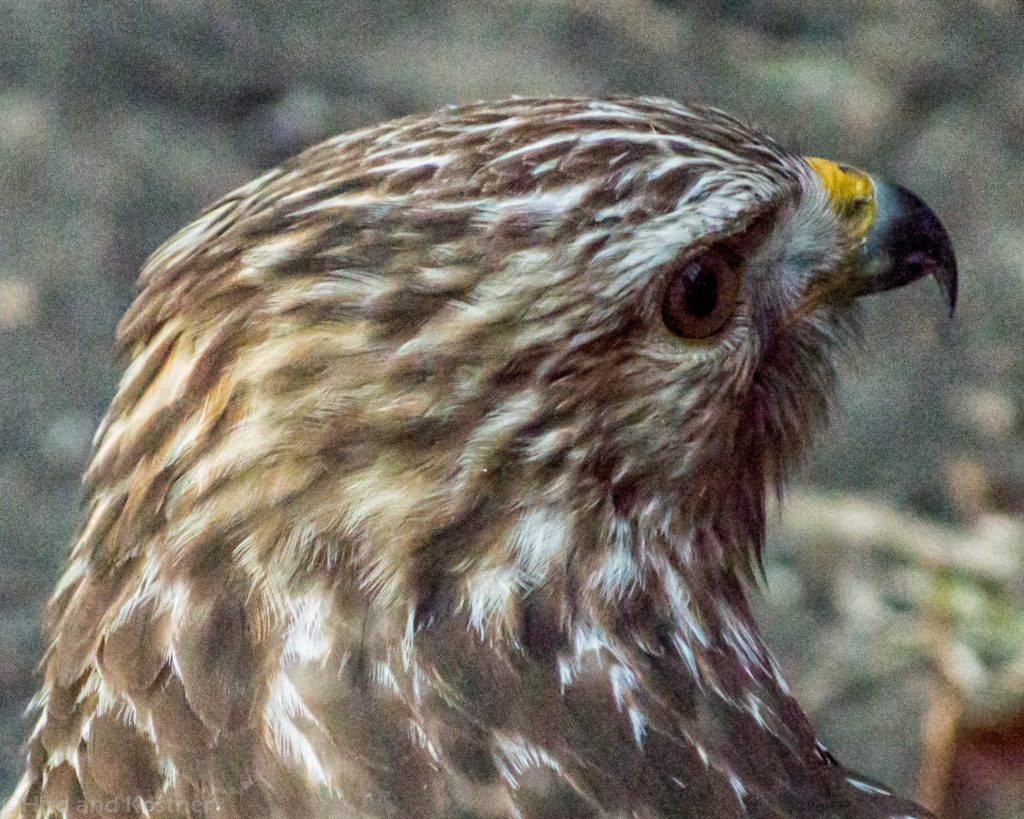 Identification of a juvenile hawk with brown and white streaking is easily confused with other species. Definitive identification of this bird began with the square tip of the tail.

The juvenile Accipiters and Buteos often resemble one another.  To identify juvenile hawks, identify if the tip of the tail is squared or rounded, the length of the tail, then look at the types of banding on the feathers.

In the waning light of that cold January day, the faint glow of the watercolor sky still awash with dimming soft pinks, the young hawk flew towards Crow Alley along the East property line, and quietly disappeared into the creeping darkness enveloping the thick branches. 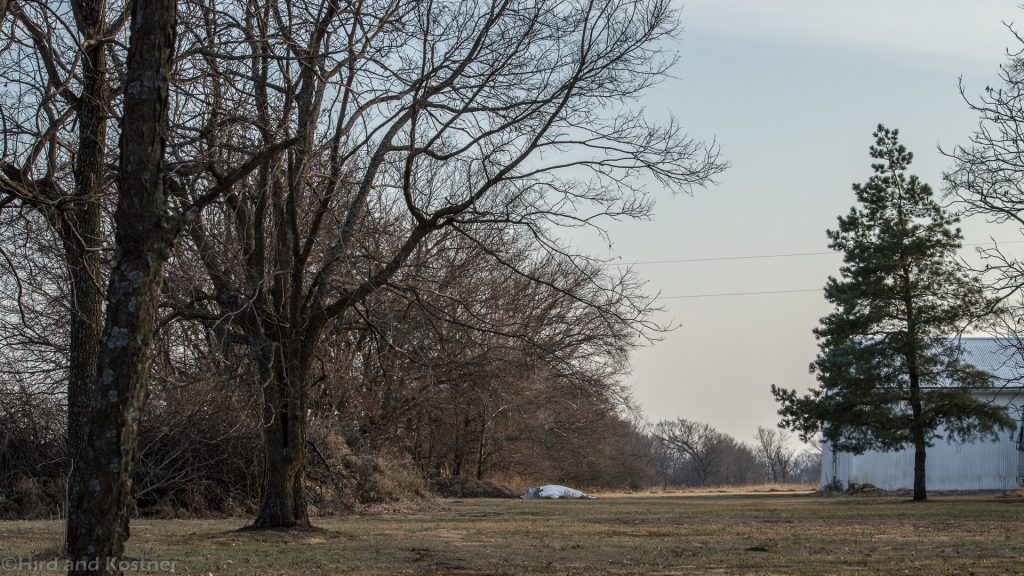 A raucous murder of crows nest in the branches along with the hawks. There is a lot of squawking between the species.  Some of theses trees, planted as far back the late 1800’s and early 1900’s, still provide valuable nesting and habitat for all local wildlife.

This unique encounter opened a door to the world of birding, however, it is certainly not our last encounter as this particular hawk, now a fine young adult,  routinely swoops across the bird feeders on the other side of the house where there are no window reflections.