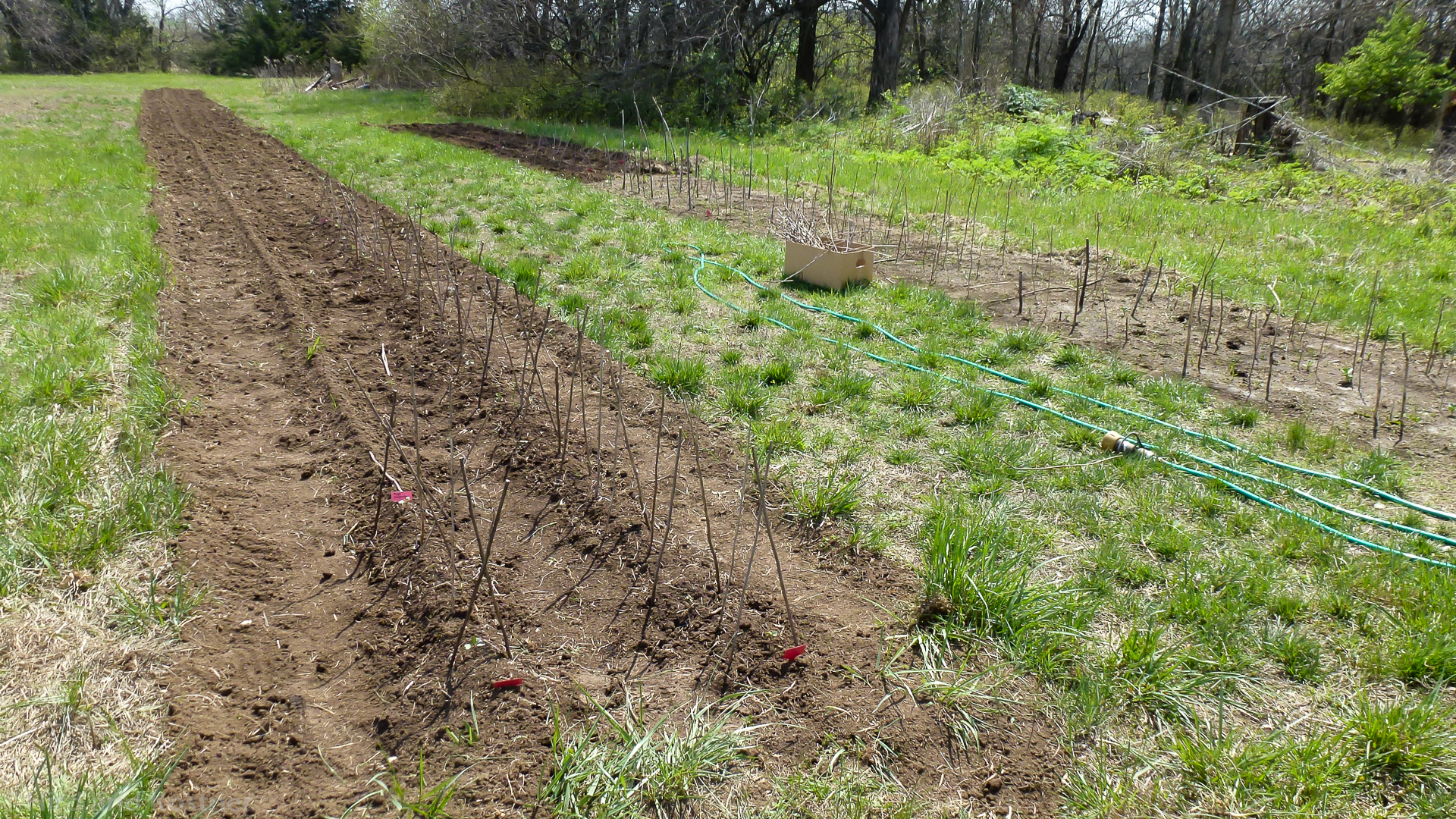 Posted at 17:17h in Butterfly Gardening by Kathy 0 Comments

The landscape of our family property holds fascination and awe as I travel the winding road of my childhood memories. There is a rich family history going back several generations that include memories from my father and his siblings, his mother, Ethel Richardson, and long before 1894 when her father, Herman Orange Richardson, purchased this land from a relative, a daughter of the original Colman family. From prey to predator, this land has nurtured and nourished an abundance of flora and fauna. This is the same animal highway watched throughout my childhood and that of my father and his mother; each year these intuitively-driven creatures continue to follow this east-west path across this field; this trajectory connects properties, now properly divided in legal documents, but that have no meaning to wildlife. The precious heritage of these forests and grasslands is slowly being stripped away by thoughtless actions of chemical farming and deforestation.

As a small child, my brother and I followed our own paths across the property. We found many treasures from the dying remnants of those days gone by when this property was filled with fruit trees and enough produce to feed the visitors to the Colman Inn. My brother and I would find an occasional strawberry popping up in the grass from the old patch, or discover a small cluster of deep purple grapes, hanging from the last section of fence that was once an arbor. In a good year, the gnarled fruit trees gave an occasional peach, and if there were enough apples, my mother made a two-crusted fruit pie, and gave us pastry crullers from the leftover crust, sprinkled with sugared cinnamon!

It is our heartfelt desire to be good stewards of the land. Some 150 years have passed since the days of the early settlers and those hardy, California-bound pioneers traveling along the deep tracks of the Oregon Trail—a mere one-half mile north of this property. After years of neglect, these strips of soil are an ambitious project to restore native host and nectar plants to our little neck of the woods along with some human food, too. As the city limits move closer, the need to be good stewards of the land becomes increasingly desperate as nearby farms are bulldozed of all trees, displacing precious habitat, and those leveled fields are then sprayed with lethal herbicides to kill the “weeds” that are crucial in the food chain of all flora and fauna, particularly the pollinators.

On wet days, animal tracks tell many stories; their direction of travel, how many are in the group. A pile of turkey feathers might indicate certain meal choices—some are predators, some are prey. One-by-one, the cloven hooves of White-tailed deer follow the same path across the field to the corner of the property where they bed down in the safe haven of the Red Cedar trees. Following near that path are many hand-sized, three-pointed tracks with distinct scales etched into the dirt, like reptilian throwbacks, each left by the large rafter of wild Turkeys. Along their path, these hump-backed creatures carve bowl-like depressions into the dry soil where a daily dust bath tends to the long, striped feathers. And with each day, follow the Coyote or Red Fox or Bobcat. The paw prints reveal which rodent or rabbit each hunts—like the small prints of small rodents and rabbits. Occasionally, the distinct paw prints of our local Bobcat appear, and once, we saw the impressive paws of a large Cougar that passed through the area, giving pause to carefully look around the property and the trees for a tell-tale tawny body with long tail. All of these tracks tell the greater story of the entire, local food chain, and how every living creature relates to another as part of a greater plan. Watching the tracks is almost as much fun as watching the plants grow; one can quickly observe the connection of plants to creatures along these animal highways.

Once the seeds are into the ground, feelings of awe surface as each seedling emerges from the soil to unfold the first leaves. There also emerges a passionate desire to fiercely guard each new plant. Fencing is not a current option for this garden. With our abundance of local wildlife, it does not take very long before the culinary delights of each species are revealed along each row filled with tender seedlings of snow peas, fava beans, broccoli, spinach, collard greens, chard, kale, cauliflower, cucumber, zucchini, and various cabbages.

Apparently, most animals don’t like pointy things. While cleaning up the flower beds for spring, it seemed like such a waste to throw hundreds of hard, thick stems from last year’s Coneflower and Tatarian Asters into the compost pile. Wouldn’t these make perfect plant stakes? These stakes are placed an X over each seedling, and, so far, have proved a good deterrence to critter plant stomping or chomping. 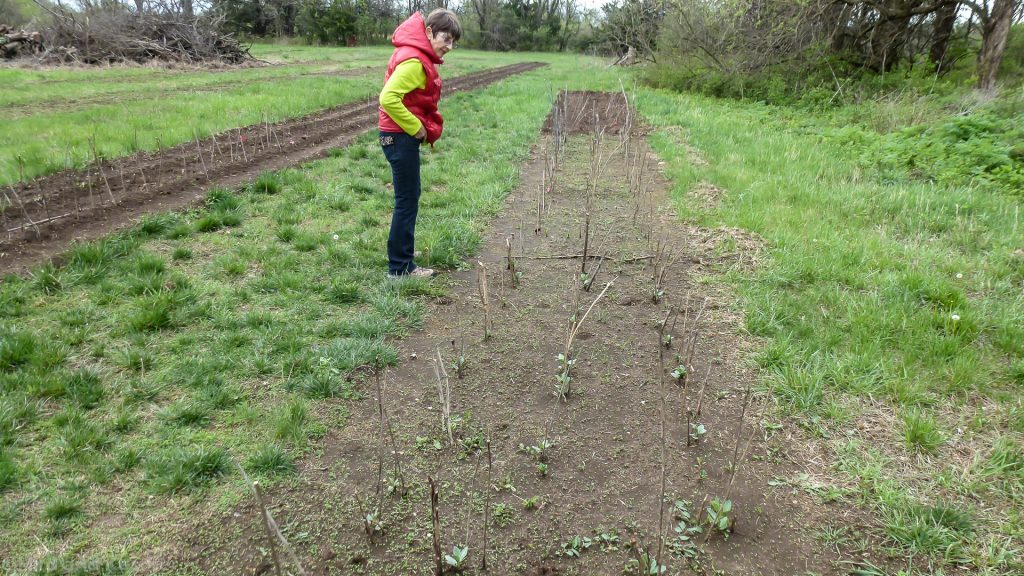 There is a satisfying delight to witness the miracle of seeds emerging from the ground. Shown here are purple fava beans, snow peas, broccoli, and cabbage. 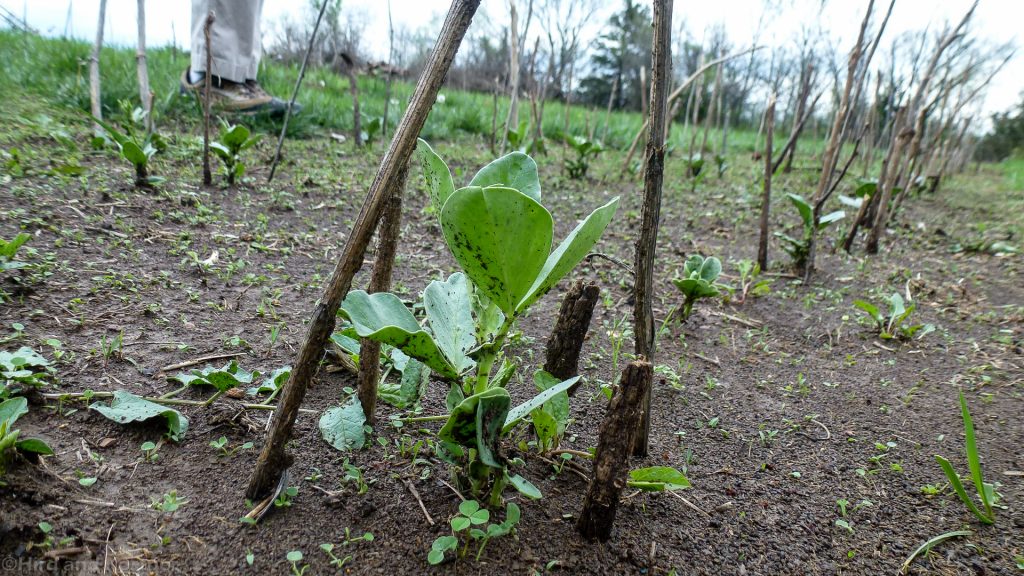 These Italian, purple Fava bean seedlings will produce pods with six seeds and grow 2-4 feet tall. Spent plants can be mowed and tilled to replenish and nourish the soil.

HOORAH! Hollyhock seedlings are growing in the entire strip! Last fall, we collected over a gallon of Hollyhocks. In early March, we scattered most of the seeds, willy-nilly, into this shorter, forty foot strip, then lightly tilled the soil over the seeds to work them into the ground. 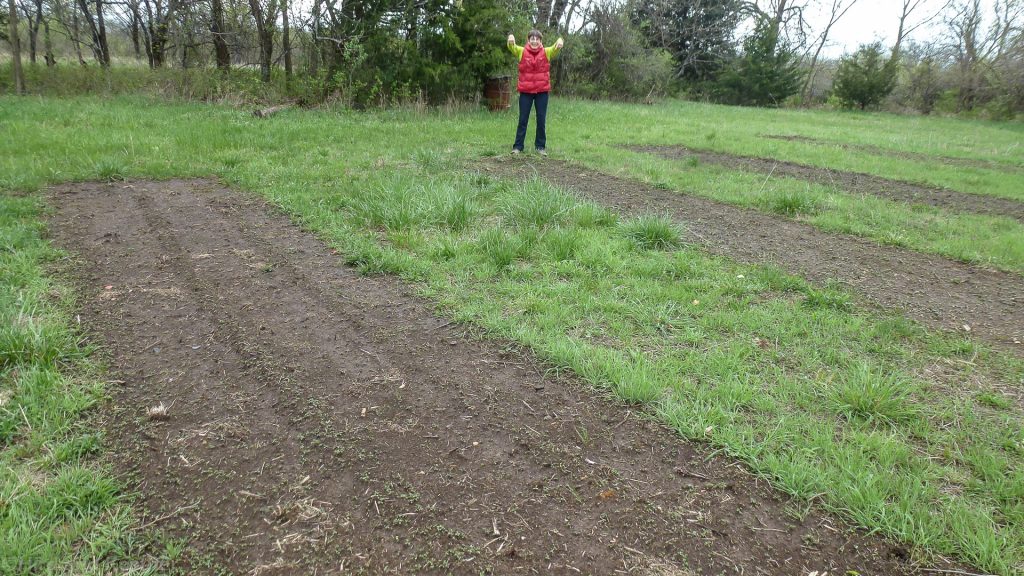 For nearly twenty years, it has been my close-to-the-heart-secret dream to manifest various blooming flowers and milkweed across this field. One plant at a time, this dream is now becoming a reality.

It would appear as if the greater portion of them survived and are tiny seedlings. Of course, there is the inherent understanding that resident deer and rabbits LOVE to eat Hollyhocks. As always, our contention is that if even one grows into a flowering plant to feed the pollinators, then to seeds, the experiment has proved wildly successful! 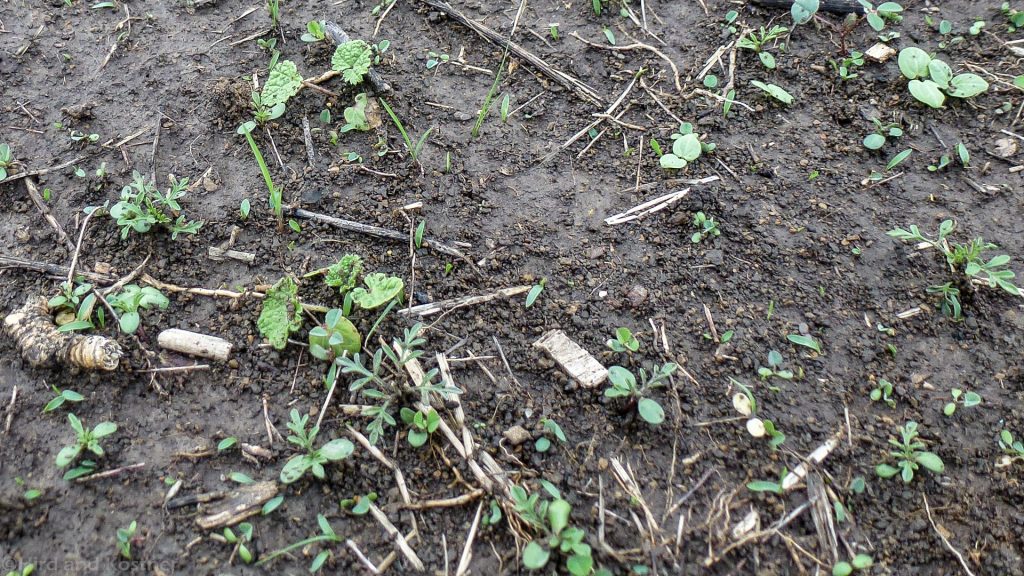 We walk the field nearly every day to mark where the milkweed seedlings are emerging. The first, and our earliest, Monarch butterfly arrived at Lepidoptera Buffet on April 5. The previous two years were much later, June 20 and May 5. We followed the female Monarch as she flew just above the ground in a urgent search for plants to deposit her eggs. After she left each milkweed, we placed stakes to mark the plant location, but nothing prepared us for the number of eggs we found covering so many tiny, two inch milkweed seedlings. Luckily, they emerged from the ground two days before her arrival. 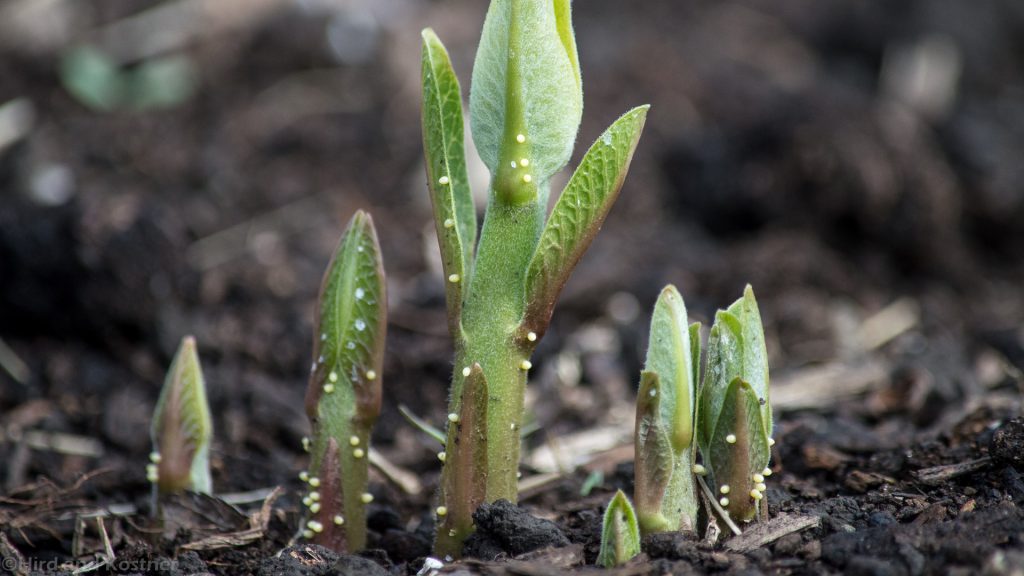 The earliest recorded arrival at Lepidoptera Buffet is April 5 when arriving Monarch butterflies beat the milkweed.

After a bone-dry winter in our neck ‘o the woods, abundant spring rains have replenished the parched soil and filled the pond. The frogs have resumed their yearly chorus. The Great Blue Heron hunts in the tall grass at water’s edge before flying to the nearby neighbor’s over-flowing pond with fish. 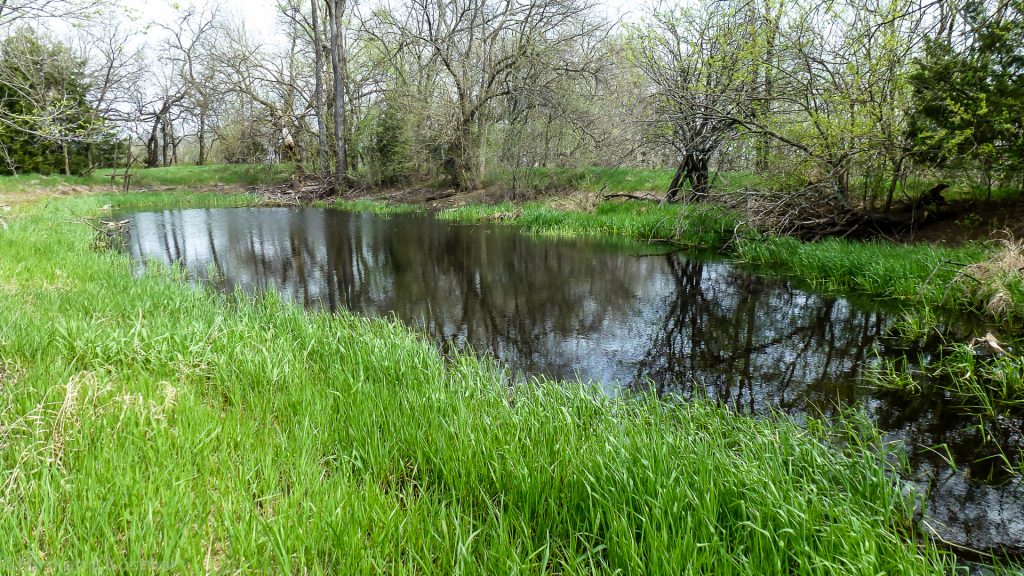 The joyful chorus of nature’s Ode to Joy croaks once more. Completely dry over the winter, the water in the pond offers precious water for the wildlife to drink.